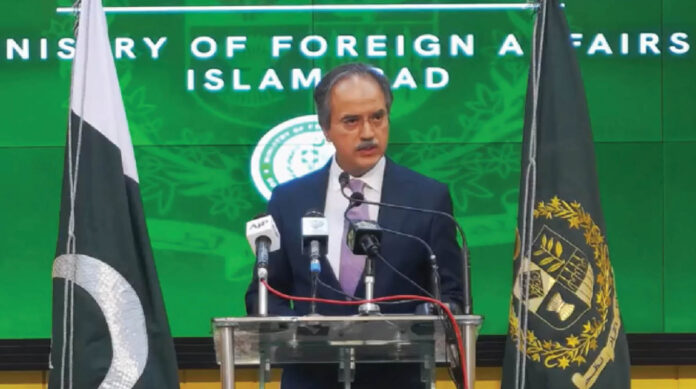 Interior Minister Rashid also rejects allegations that Islamabad provided any military support to Afghan Taliban
ISLAMABAD
Islamabad on Wednesday reacted to the draft bill introduced in the US Senate seeking sanctions against Pakistan along with the Afghan Taliban, terming references to the country, which remained the frontline state in the US-led campaign in Afghanistan, as “unwarranted”.
Separately, Interior Minister Sheikh Rashid Ahmed rejected allegations that Pakistan had provided any military support to the Afghan Taliban.
The reaction from the Foreign Office as well as from the interior minister came a day after 22 US Senators from the Republican Party moved a draft bill that sought sanctions against the Taliban but also called for assessing the alleged role Pakistan played since 2001 in supporting the insurgent group.
The 57-page draft bill called ‘‘Afghanistan Counterterrorism, Oversight, and Accountability Act of 2021’’ made several references to Pakistan.
“An assessment of support by state and non-state actors, including the Government of Pakistan for the Taliban between 2001 and 2020, including the provision of sanctuary space, financial support, intelligence support, logistics and medical support, training, equipping, and tactical, operational, or strategic direction,” read the draft bill.
It also calls for an assessment about the alleged role of the state, non-state actors as well as the government of Pakistan in supporting the Taliban offensive leading to the fall of Kabul.
The Republican senators further ask the Biden administration to assess the role of Pakistan in supporting the Taliban offensive against Panjshir Valley.
“We see that a debate is underway in Washington both in the media and on Capitol Hill to reflect on and examine the circumstances leading to the US withdrawal from Afghanistan. The draft legislation introduced in the US Senate by a group of Senate Republicans seems to be a reaction to this debate,” Foreign Office spokesperson Asim Iftikhar said in a statement.
“The legislation includes references to Pakistan that are completely unwarranted,” the foreign office said.
The statement termed all such references inconsistent with the spirit of Pakistan-US cooperation on Afghanistan since 2001, including facilitation of the Afghan peace process and during the recent evacuations of American and other nationals from Afghanistan.
It noted that Pakistan has consistently maintained that there was no military solution to the conflict in Afghanistan. Similarly, a coercive approach will not work and the only way to achieve long term sustainable peace in Afghanistan was through engagement and dialogue.
“Moreover, sustained security cooperation between Pakistan and the United States would remain critical in dealing with any future terrorist threat in the region. Such proposed legislative measures are, therefore, uncalled for and counterproductive,” the statement added.

Earlier, Sheikh Rashid while reacting to the development said the country did not provide any military support to the Taliban.

Declaring any one disqualified for life time is not easy: CJP

Army to stay out of politics: COAS Bajwa

New Army Chief will be appointed by month-end: Kh Asif