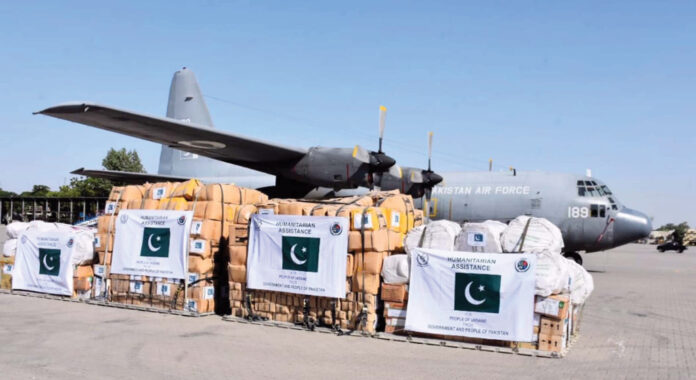 ISLAMABAD
The National Disaster Management Authority (NDMA) on Thursday handed over the second consignment of humanitarian assistance to Ukrainian Envoy, Markian Chuchuk as a relief package for war-trodden people.
The handing over ceremony was held here at Nur Khan Airbase, said a news release.
The relief items consignment including emergency medicines, blankets and food items was being dispatched to Ukraine through two Pakistan Air Force C-130 aircraft.
Minister of State for Foreign Affairs, Hina Rabbani Khar handed over the relief goods to the Ukrainian Ambassador in Pakistan Markian Chuchuk during an official ceremony, attended by officials of NDMA, Foreign Office and Ukrainian Embassy.
Speaking on the occasion, the Minister of State for Foreign Affairs said that Pakistan highly valued bilateral relations with Ukraine stretched over the past three decades. She said that the government of Pakistan had extended humanitarian relief goods as solidarity with Ukrainian people.
While expressing deep concern over on-going war in Ukraine, she emphasized that both countries should resolve the matter through dialogue and diplomacy for global peace.