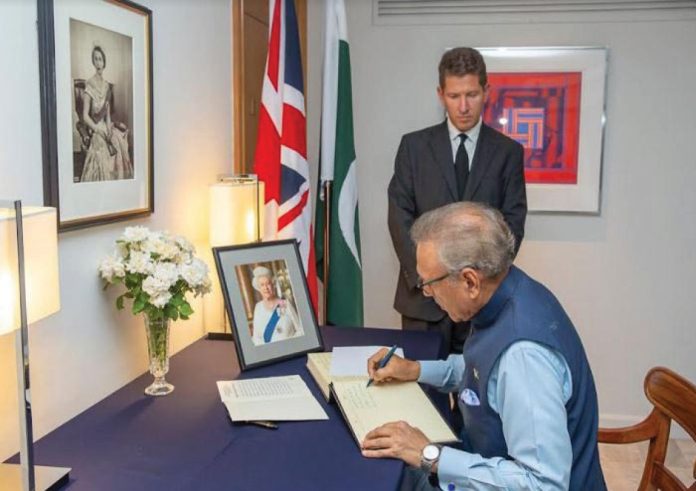 ISLAMABAD
The Pakistani leaders have expressed their condolences over the demise of Her Majesty Queen Elizabeth II who breathed her last yesterday terming her one of the iconic figures of our times.
President Dr Arif Alvi expressed his sincere condolences to the Royal family, the government, and the people of Great Britain on the sad demise of Queen Elizabeth II, the second longest reigning monarch in the history of Great Britain.
He said that her inspiring leadership qualities propelled her to the status of great and beneficent ruler that would be remembered in golden words in the annals of world history.
He offered his sincere and heartfelt prayers for the departed soul. He further said that his thoughts go out to the Royal family members and people of Great Britain at this time of sorrow.
Taking to his Twitter handle, Prime Minister Shehbaz Sharif wrote: “Deeply grieved at the passing of Her Majesty Queen Elizabeth II. Pakistan joins the UK & other Commonwealth nations in mourning her death. My heartfelt condolences to the Royal Family, people & government of the UK.”
The prime minister said that while being British queen, she was not only the longest reigning monarch but also played a key role for positive developments in the United Kingdom and the world. He said the under her leadership, the Commonwealth became the biggest association of the sovereign states.
The prime minister said besides her services for the public interest, the presence of Queen Elizabeth remained a symbol of unity and brotherhood. He said being head of the Commonwealth and the United Kingdom, the people of Pakistan always showed reverence to the Queen Elizabeth.
During her reign spanning over decades, the relationship between the people of Pakistan and the Queen got strength. The prime minister said that the he along with the whole Pakistani nation shared the grief of the British Royal Family, the UK government as well as the people.
Foreign Minister Bilawal Bhutto Zardari tweeted: “Deeply saddened by the loss of one the most iconic figures of our times. Queen Elizabeth II personified an era & embodied hope & compassion. At this time of grief, our thoughts & prayers go out to people & govt of UK and @RoyalFamily
In a statement, former president and PPP Co-Chairman Asif Ali Zardari expressed grief over the death of Queen Elizabeth II of Great Britain.
He expressed his condolences to the Royal family, the British government and the people on the death of the Queen. He said people of Pakistan shared the grief with the Royal family and the government of Great Britain in this hour of sorrow.