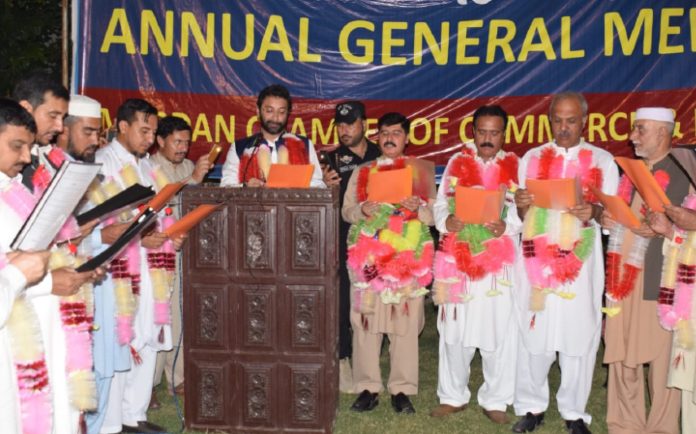 Falak Sher
Mardan
The Senator Faisal Saleem-ur-Rehman, chairman of the Economic Affairs Standing Committee, took outh from the newly elected cabinet of the Mardan Chamber of Commerce and Industry.
The annual general body meeting of the Mardan Chamber of Commerce and Industry was held. In the meeting, the Election Commission announced the official result of the election for the year 2022-23, as a result of which Zahir Shah President, Shah Riaz Senior Vice President, Jan Muhammad Vice President were elected unopposed.
From the meeting, the newly elected president Zahir Shah said that it is a very happy occasion for me that the business community trusted me and made me the president of the chamber again and encouraged me a lot. Zahir Shah said that there are many opportunities for development work in Mardan region which needs to be worked on.
The newly elected president said that this is a golden opportunity for us to do more work for the development of the Mardan Chamber. I will stand in the ranks of other development chambers of the country and give a high position. The newly elected president said in his address that we will do our best during our tenure to create more trade opportunities for the business community and different delegations of businessmen to different countries.
Senator Faisal Saleem-ur-Rehman said that the business community of Khyber Pakhtunkhwa is paying the highest taxes, but the biggest problems are faced by the businessmen here. The Chief Guest said that the businessmen will raise their voice to solve whatever problem they are facing at every forum. At the end of the meeting, Zahir Shah thanked all the participants