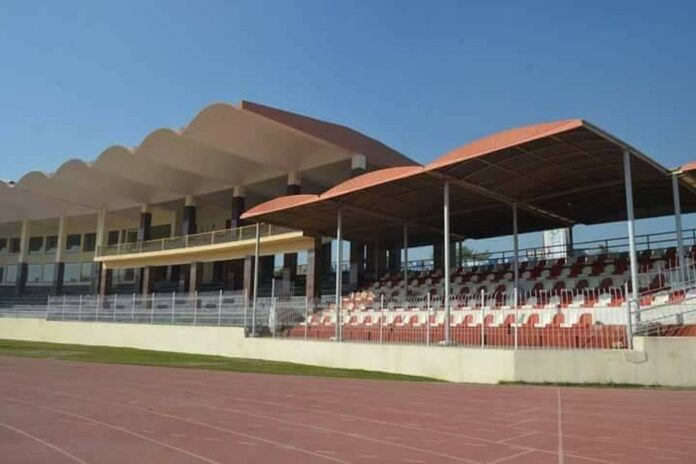 PESHAWAR
Entry of national, international players into Peshawar Sports Complex has been completely banned and only those players would be allowed to have entry cards, administrator Peshawar Sports Complex, Syed Jaffar Shah said here on Thursday.
Talking to media men, Syed Jaffar Shah said that the instruction in this connection was issued by Director General Sports Khyber Pakhtunkhwa, Khalid Khan to him that there will be no entry whatsoever the status of the players are.
He said with the release of cards the ever rising issue of exchange of harsh words, card checking, misbehaving attitude and allowing national and international players and cricketers to the main complex would be resolved.
However, the players while complaining said that the misbehaving attitude of the watchmen was rising with every day passing and their overall attitude with the players was not appropriate.
It is embarrassing for us as the same watchmen Atiq first beaten up current national badminton champion Murad Ali and U19 World Cup Cricketer Nisar Afridi but the then Director General Sports Asfandyar Khan Khattak resolved the quarrel with Jirga dialogue and transferred the watchmen but soon after taking the charge the same watchman Atiq was transferred again by the newly posted Director General Sports Khalid Khan.
He after taking the charge, a day earlier, Muhammad Haris, a Pakistan’s international wicket-keeper batsman, faced an embarrassing situation when he was asked to leave the ground because he does not have entry card. He was also facing a misbehaving attitude at the hands of the watchman Atiq who was performing his duties at the main Gate of the Peshawar Sports Complex.
It is pertinent to mention here that the same watchmen had a fight with Pakistan No. 1 badminton player and current Pakistan Champion Murad Ali. Atiq slapped Murad Ali and Nisar Afridi instantly on their faces.
Junior World Cup cricketer Nisar Afridi on this occasion said that the attitude of the watchmen was not appropriate with the players coming for their training in Peshawar Sports Complex.
“We have just 15 days or a month training here so how can we make a card for this shorter period of our training otherwise we have our training in the National Cricket Academy,” he said.
“I introduced myself to the watchmen but he did not allow me and asked to leave the ground,” Muhammad Haris said. The other cricketers including Saddam Hussain, Osama, Abbas Khan, Shakeel Khan, Ishaq Afridi etc were some of the international cricketers who faced similar problems during their entry to Peshawar Sports Complex.
It is worth mentioning here that during the exchange of hot words, Nisar Afridi was also slapped on the face by the same watchman and later on the former DG Sports Asfandyar Khan Khattak during a Jerga amicably resolved the issue.
The cricketers and other players blamed the misbehaving attitude of the watchmen at the Gate of Peshawar Sports Complex and requested the Chief Minister Khyber Pakhtunkhwa Mahmood Khan to take immediate action against watchman and administrator of the Peshawar Sports Complex Syed Jaffar Shah.
“We are training only to get name and fame for Pakistan and the management of the Complex should give respect instead of misbehaving with the players playing at national and international levels,” the cricketers said when contacted.