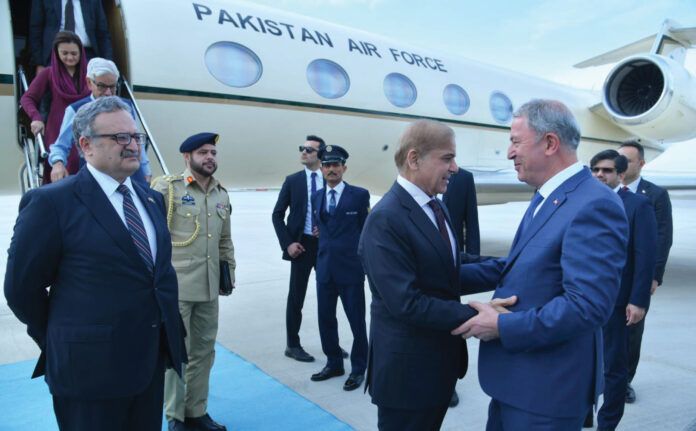 Leaves for Ankara with investment & trade high on talks agenda
ISLAMABAD
Prime Minister Shehbaz Sharif said on Tuesday the quantum of bilateral trade between Pakistan and Turkey does not reflect the strength of their relations while pointing out that the two countries need to explore more opportunities for economic collaboration.
The prime minister said this in an interview with Anadolu Agency before leaving for Turkey, with investment and trade high on the agenda of talks.
The prime minister mentioned the two countries are also celebrating the 75th anniversary of their diplomatic relations this year. “The current level of bilateral trade is still not a true reflection of the excellent state of our relationship,” Sharif said. “This is also an area where immense opportunities exist for both countries.”
He said he would interact with leading Turkish business companies and encourage them to utilise the economic opportunities in Pakistan after surveying different economic sectors. “With a population of over 220 million, Pakistan offers its investors a strong and large consumer market with an ever-expanding middle class,” he added. “Pakistan holds numerous investment opportunities with lucrative returns for investors.”
The prime minister noted that Pakistan and Turkey have always supported each other on all issues of core national interest. “Both Pakistan and Turkey have a similarity of views on regional and international issues and enjoy close collaboration on bilateral, regional, and multilateral forums,” he said. “People-to-people and cultural contacts are on an upward trajectory.”
The prime minister is also accompanied by a high-level political delegation while business leaders from Pakistan and representatives of leading companies across sectors are also traveling separately to Turkey to participate in business engagements. Sharif will meet the Turkish president one-on-one during the visit and also hold delegation-level talks.
“Besides covering the entire gamut of Pakistan-Turkey bilateral relations, the two leaders will exchange views on regional and international issues,” the Foreign Office said in a statement. “Both leaders will address a Joint Press Stakeout after their meetings. President Erdoğan will host a dinner in honor of the Prime Minister.”
“During the visit, the prime minister of Pakistan and the president of Turkey would jointly unveil a logo, marking the commencement of celebrations of this important milestone,” the statement continued.
The Turkish ministers of foreign affairs, trade, and health will call on Sharif during the visit, as will heads of selected Turkish companies during the PM’s stay in Ankara.
“The prime minister will have extensive interaction with leading Turkish businessmen and potential investors from diverse sectors,” the foreign office said, adding that he would be hosted by the president of the Union of Chambers and Commodity Exchanges of Turkey (TOBB).
“The prime minister will also attend a Pakistan-Turkey Business Council Forum, hosted in collaboration with DEIK [Turkish Foreign Economic Relations Board]. During these events, the Prime Minister will highlight Pakistan’s vast investment potential and encourage Turkish companies to invest in Pakistan and work to strengthen Pakistan-Turkey trade and economic ties. Prominent businessmen from Pakistan will participate in these events and will also hold B2B meetings on the sidelines.”
Turkish companies have invested more than $1 billion in different sectors in Pakistan, including construction, power, solid waste management, hygiene products, electronics and dairy. Prominent investors include Al Bayrak, Oz Pak, Zorlu, Arcelik, Siyahkalem, Sutas, Coca-Cola Icecek, and Hayat Kimiya. TLTP