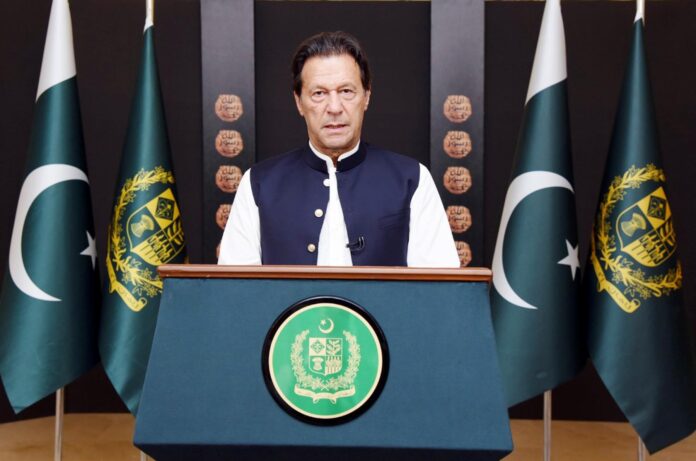 Says Rs440bn to be spent on health card programme in three years
LAHORE
Prime Minister Imran Khan has launched the ‘Naya Pakistan Sehat Card’ scheme providing the annual health insurance cover of up to Rs1 million to each family across Punjab.
“This is a landmark [scheme]. This is a defining moment towards our course to make Pakistan a welfare state,” the prime minister said while addressing the launching ceremony on Monday.
Starting from January 2022, he said, the health card would be distributed across the province within three months allowing the whole of the Punjab population to avail free medical treatment worth Rs1 million a year at both government and private hospitals.
“This is not health insurance, but rather a health system. Now the private sector will build hospitals even in villages where the basic health units remain vacant as no doctor desires to be posted there. Now private sector will come and the poorest of the poor will get free treatment,” the prime minister remarked.
He said the difficulties faced by his family for treatment of her cancer patient mother, had prompted him to think of introducing a universal health insurance facility for the whole population so that no one had to sell out belongings for the medical treatment of their dear one. He said the health insurance cover would give the families confidence to get treated their ailing family members which otherwise was unaffordable for many.
Reiterating his vision of replicating the Madina State model in Pakistan, he said the Holy Prophet (PBUH) established the world’s first welfare state even without having sufficient resources. He apprised the audience that despite the discouraging notions about the feasibility of Shaukat Khanum Hospital, 75% of per cent patients were getting free medical treatment.

The hospital which was built at cost of Rs700 million is now spending Rs10 billion for treating the patients, the premier added. Similarly, he said despite immense pressure from the opposition for a blanket lockdown during the Covid-19 pandemic, he opposed the idea just fearing the sufferings of the daily wagers and vendors.

He said unfortunately the elite class never thought of the poor people while suggesting the lockdown. He said owing to the resource and systemic constraints, Pakistan could also not afford supplying food to every household as China did in Wuhan.

The prime minister said now Pakistan was being cited as a country which had effectively maintained balance between lives and livelihood, just owing to Allah’s blessing and the prayers of the poor people. He told the gathering that the Punjab government would spend Rs440 billion in three years for the health insurance facility to the people.

He said no one had ever thought of such a facility as even the Punjab chief minister and health minister were shocked considering the project’s financial implication. He said in order to ebb away the pressure of inflation from the people with below Rs50,000 monthly income, the government had launched Ehsaas Rashan scheme to provide 30% subsidy on ghee, flour and pulses.

Moreover, the government would also provide 6.2 million education scholarships worth Rs47 billion to the deserving students.

Addressing the ceremony, Chief Minister Sardar Usman Buzdar said that the health sector is the Punjab government’s top priority. He said that nine hospitals have been set up in the last three years.

In her address, Punjab Health Minister Dr Yasmeen Rashid said that eight point five million Health Cards have been distributed in Punjab so far. She said that under this program, thirty million families will be provided Health Cards by March next year. She said that the Prime Minister’s vision is of human service.