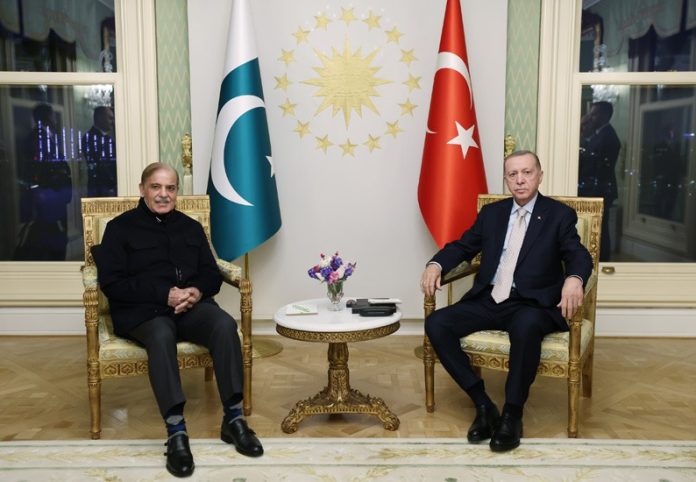 Pakistan and Turkiye on Friday reaffirmed their commitment to take the bilateral trade to the volume of $5 billion within three years to exploit the immense untapped potential between the two countries.

The bilateral relations were discussed in one-on-one meeting between Prime Minister Shehbaz Sharif and Turkish President Recep Tayyip Erdogan as well as the delegation level talksheld at at Vahdettin Mansion, after both the leaders jointly launched the third of the four MILGEM Corvette Ships for the Pakistan Navy, PNS Khaybar, at the Istanbul Shipyard here.

Both the leaders agreed to take robust follow up action for the implementation of Trade in Goods Agreement that was signed by the two countries in August this year, a PM Office press release said.

The prime minister stressed the need to explore avenues of furthering cooperation in the area of renewable energy, particularly wind and solar energy.

During the talks, both sides reviewed bilateral relations, with particular emphasis on the ongoing cooperation in diverse fields including trade and investment, defense cooperation, education, connectivity and health.

Expressing satisfaction on the positive trajectory of ongoing cooperation, they also agreed to take all necessary steps to sustain and strengthen the multifaceted engagement.

The prime minister brought out that although the two countries were marking the 75th anniversary of establishment of diplomatic relations this year, which would be befittingly commemorated, the fraternal bond between the two peoples was centuries-old; rooted in common civilizational, cultural and religious heritage.

He also expressed his profound condolences on the terrorist attack in Istanbul on November 13, 2022 and reiterated support to Türkiye’s fight against terrorism.

Prime Minister Shehbaz expressed satisfaction on the growing defence cooperation between Pakistan and Türkiye – including through joint ventures and capacity building – and underpinned the need to jointly enhance self-reliance in the area of defence production.

He noted that the co-production of MILGEM Corvettes for Pakistan Navy was a major step in that direction.

While underscoring the importance of High-Level Strategic Cooperation (HLSCC) as an important institutional framework for advancing bilateral cooperation in multiple areas, the two leaders agreed to organize the 7th Session of the HLSCC at a mutually convenient date in Islamabad.

Prime Minister Shehbaz and President Erdoğan also addressed the media in a Joint Press Stakeout emphasizing their mutual desire to bring the ongoing bilateral cooperation in sync with the deep rooted fraternal ties between the two peoples.

The prime minister is visiting Türkiye on the invitation of President Erdoğan to participate in the launching ceremony of the third of the four MILGEM Corvettes for Pakistan Navy.