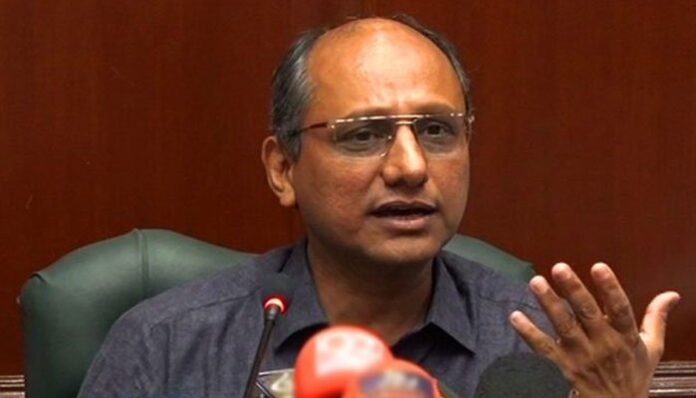 Sindh Information and Labour Minister, Saeed Ghani, has said that government’s oppression unleashed upon the parliament lodges in Islamabad has proved that Prime Minister Imran Khan has mentally accepted his defeat in the no-confidence move against him by the Opposition.

Speaking at a press conference here at his camp office on Friday, the Sindh Information Minister said that never in the history of Pakistan such blatant aggression had been committed inside the parliament lodges in the federal capital.

He condemned the police action inside the parliament lodges against two MNAs, one senator, and dozens of the workers of the Jamiat Ulema-e-Islam (Fazl) while terming the incident an act of state oppression.

He said the present government had opted to use undemocratic means against the Opposition after sensing its defeat in the no-confidence motion. He said the police action inside the parliament lodges showed that PM Imran Khan had panicked and was mentally upset.

The Information Minister said the present government had become panicked and accepted that the no-confidence motion moved by the Opposition against the PM would succeed.

He said the PM and his cabinet colleagues themselves had conceded that the MNAs belonging to the ruling party had become a renegade. That is the reason that the treasury lawmakers are being directed not to go to the Parliament House on the day of voting on the no-confidence motion while the Speaker had also been directed not to accept the votes of the ruling party’s legislators in favour of the motion, he said.

The Information Minister said the foul language being used by Imran Khan against the Opposition showed that the PM was not in his senses as he acted like a vanquished chief executive of the country.

He said the PM had criticised the spoken Urdu by PPP Chairman, Bilawal Bhutto Zardari when Imran Khan didn’t know the basics of Geography and the national language.

To a question, Saeed Ghani said the situation in the country had not worsened to an extent that it warranted imposition of the state of emergency as the Opposition political parties did have the right to agitate peacefully. He said the people of the country had become highly upset due to Imran Khan’s rule in the country, as they wanted to get rid of him.

He said the MNAs who had to seek public support to contest the next general elections had become renegade from the ruling PTI as they were even ready to sacrifice their seats to send packing the incumbent incompetent PM.

He said it was a reality that dozens of the lawmakers on the treasury benches in the National Assembly were ready to quit their seats in order to save their future politics and to make themselves ready to face masses before the next general elections.

Speaking on the occasion, General-Secretary of PPP Sindh Waqar Mehdi greeted the people of Sindh and Punjab for giving a very warm reception to the recently concluded long march of his party from Karachi to Islamabad. =