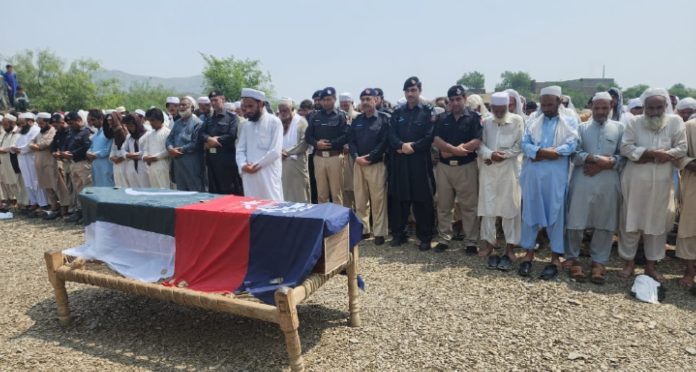 KHYBER
A police soldier of Regi Lalma, Peshawar police station who had embraced Shahadat in firing of militants last night was laid to rest in Lashoora village of Jamrud here on Thursday.
The police cop identified as ASI Rekhmeen Khan Afridi had been shot and dead by unknown militants in firing when he was executing his official at Regi Lalma police station, the outskirt locality of Peshawar.
Beside District Police Officer (DPO) Khyber Muhammad Imran, Station House Officer (SHO)Jamrud police station Shah Khalid large number of people from different walk of life and relatives of the deceased participated in the funeral prayer of the late police official.
A smart contingent of police personnel saluted to it while the DPO and other officials put floral wreaths on the grave of the Martyred police.
The district high official Muhammad Imran paid rich tribute to the Martyred soldier and said his blood will never be wasted and the culprits will be bring to book soon.
On behalf of the highup, he also sympathized with the heirs of the late cop and assured them full support.