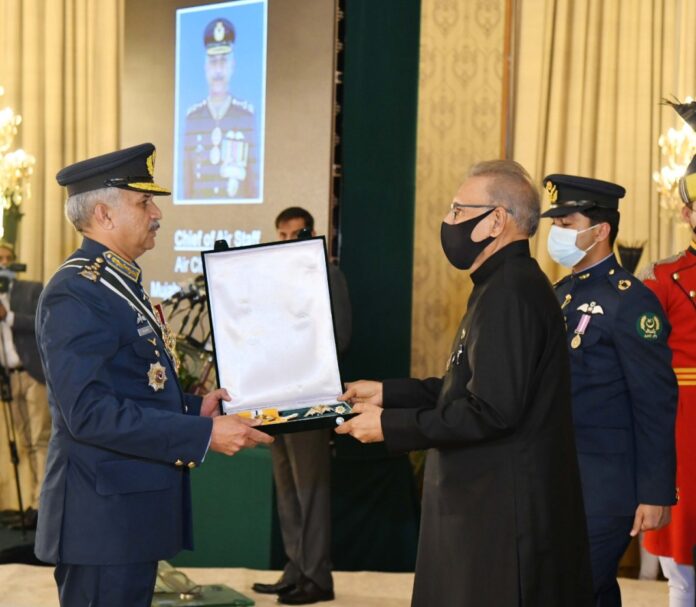 The President decorated the outgoing Air Chief with the prestigious award in recognition of his dedicated services and for raising the morale of the people of Pakistan in the Operation Swift Retort.

The investiture ceremony held at the President House was attended by senior officials.

He is a graduate of Combat Commanders School, Command and Staff College, Jordan and National Defence University, Islamabad. He did his Master’s degree in War Studies and Defence Management. He was decorated with “The Legion of Merit Medal” by the Government of Republic of Turkey.

He was promoted to the rank of Air Chief Marshal and appointed as Chief of the Air Staff, Pakistan Air Force on March 19, 2018.

On February 27, 2019 under his command, Operation Swift Retort was conducted in response to Indian fighter jets’ violation of Pakistan’s air space at midnight of February 28, 2019.

Air Chief Marshal Mujahid Anwar Khan played a visionary role in planning and execution of the Operation Swift Retort. The successful response of Pakistan Air Force established the credibility of Pakistan’s conventional deterrence in maintaining strategic edge in the region.

Under the command of Air Chief Marshal Mujahid Anwar, the spectacular success of PAF response, to the Indian misadventure, was widely applauded by the nation.