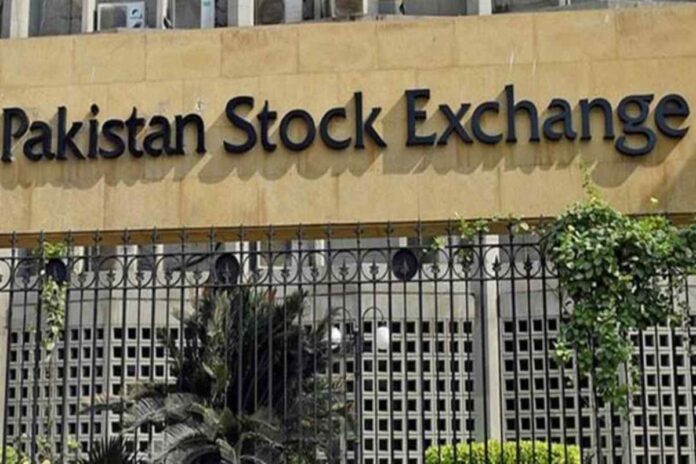 KARACHI
The Pakistan Stock Exchange (PSX) snapped the two-day winning streak on Monday amid uncertainty regarding resumption of the International Monetary Fund’s (IMF) $6 billion Extended Fund Facility (EFF), with the benchmark KSE-100 Index shedding 192.08 points (-0.43 percent) to close at 44,629.45 points.
Other reasons for the bearish trend included massive depreciation of Pakistan rupee against the US dollar during the day, as the rupee broke all the record for all-time low to close the day’s trade at 172.78, and increase in petroleum prices by up to Rs10.95 per litre and power tariff by Rs1.29 per unit. However, expectation of positive news from the IMF still supported the market and saved it from a free fall.
The market opened on a negative note and fell by almost 380 points within the first half an hour; however, the traded volumes were less than 10 million at this stage, and later the market remained volatile throughout the session.
The KSE-100 Index moved in a range of 547.9 points, showing an intraday high of 44,990.1 points and a low of 44,442.2 points. Among other indices, the KSE All Share Index shed 96.03 points (-0.38 percent) to close at 30,674.11 points, while All Share Islamic Index shed 68.6 points (-0.31 percent) to close at 21,847.04 points.
A total of 339 companies traded shares in the stock exchange, out of them shares of 113 closed up, shares of 215 closed down while shares of 11 companies remained unchanged. Out of 95 traded companies in the KSE-100 Index, 30 closed up, 64 closed down and one remained unchanged.
The overall market volumes decreased by 86.04 million to 248.29 million shares. Total volume traded for the KSE-100 Index was 102.25 million shares. The number of total trades decreased by 13,087 to 108,216, while the value traded decreased by Rs2.97 billion to Rs8.82 billion. The market capitalisation decreased by Rs29.48 billion.
Among scrips, HUMNL led the table with 25.1 million shares, followed by WTL (20.84 million) and HASCOL (13.84 million). Stocks that contributed significantly to the volumes include HUMNL, WTL, HASCOL, UNITY and DSL, which formed 33.5 percent of total volumes.
Sector wise, the index was let down by technology & communication with 146 points, cement with 47 points, engineering with 27 points, food & personal care products with 25 points and textile composite with 24 points. The most points taken off the index were by TRG which stripped the index of 88 points followed by SYS with 47 points, BAHL with 42 points, FFC with 22 points and UNITY with 17 points.
The sectors propping up the index were oil & gas exploration companies with 77 points, commercial banks with 42 points, fertilizer with 19 points, investment banks/ investment companies/ securities companies with 8 points and insurance with 6 points. The most points added to the index were by HBL which contributed 48 points followed by MCB with 31 points, OGDC with 30 points, PPL with 29 points and ENGRO with 27 points. The oil and gas exploration sector saw renewed investors’ interest after international oil prices hit their highest level in years.