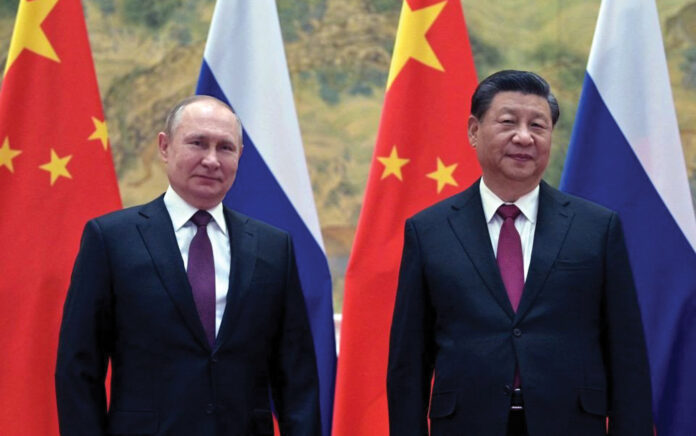 BEIJING
Russian President Vladimir Putin touched down in Beijing for the 2022 Winter Olympics on Friday, bringing with him a deal to increase natural gas supply to China amid rising tensions with the West.
Putin told Chinese President Xi Jinping in Beijing that Russia had prepared a new deal to supply China with an additional 10 billion cubic metres of natural gas, according to a broadcast of their talks aired in Moscow.
Russia, one of the global leaders in hydrocarbon supplies, has been strengthening its ties with China, the world’s top energy consumer against the backdrop of Moscow’s standoff with the West over Ukraine and other issues.
Chinese state television CCTV said Putin had arrived in the Chinese capital, noting that he had, like China, expressed opposition to the “politicization” of the Games.
CCTV footage showed a jet flying with the Russian and Chinese flags. Next to it were jets with Mongolian and Serbian flags. Serbian president Aleksandar Vucic and Prime Minister L Oyun-Erdene, of Mongolia, are expected to attend the opening ceremony later on Friday.
Earlier, state media reported that Qatar’s Emir Sheikh Tamim bin Hamad Al Thani and the United Arab Emirates’ Crown Prince Sheikh Mohamed bin Zayed Al Nahyan had also touched down.
The United States and some of its allies have announced a diplomatic boycott of the Games in protest at China’s human rights record. China denies any abuses.