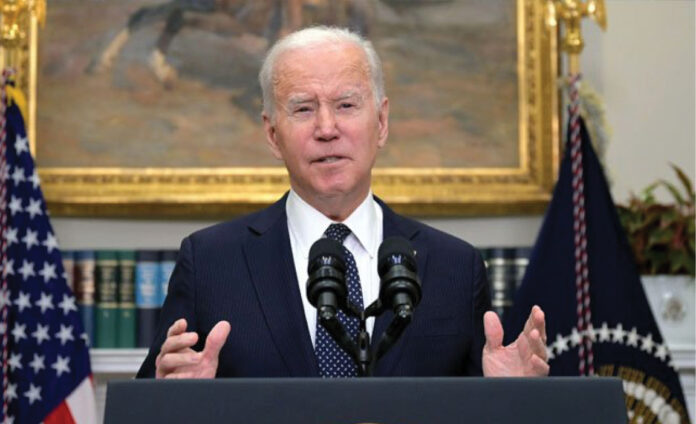 US Defence Secretary say Russian forces were beginning to ‘uncoil and move closer’
Washington
President Joe Biden said he is “convinced” that Vladimir Putin has decided to invade Ukraine within the week, an event that would trigger Western sanctions set to turn Russia into what a US official called a “pariah.”
“As of this moment I’m convinced he s made the decision,” Biden said in televised remarks at the White House.
Biden said the attack could come in the next “week” or “days” and that targets would include the capital Kyiv, “a city of 2.8 million innocent people.”
The US leader insisted it was “not too late to de-escalate and return to the negotiating table,” but warned that if an attack comes, the Russian president will have “slammed the door shut on diplomacy.”
The Kremlin insists it has no plans to attack its neighbor, which has angered Russia by seeking long-term integration with NATO and the European Union.
However, the United States says that with an estimated 149,000 Russian troops on Ukraine s borders — as many as 190,000, when including the Russian-backed separatist forces in the east — it’s only a matter of when.
Adding to jitters, Russia s defense ministry announced that Putin would personally oversee previously scheduled drills involving nuclear-capable missiles on Saturday.
And on the ground in Ukraine s disputed east, sporadic clashes fed a growing sense of dread.
An AFP reporter near the front between Ukrainian government forces and the pro-Russian territory in the Lugansk region heard explosions and saw damaged civilian buildings on Kyiv s side of the line.
There were growing fears that only a spark — which Washington warns could be a deliberate “false flag” incident created by the Russians — might now be needed to set off the largest military confrontation in Europe since World War II.
A US defense official said that more than 40 percent of the troops surrounding Ukraine were now “uncoiled” in a position to go on the offensive.