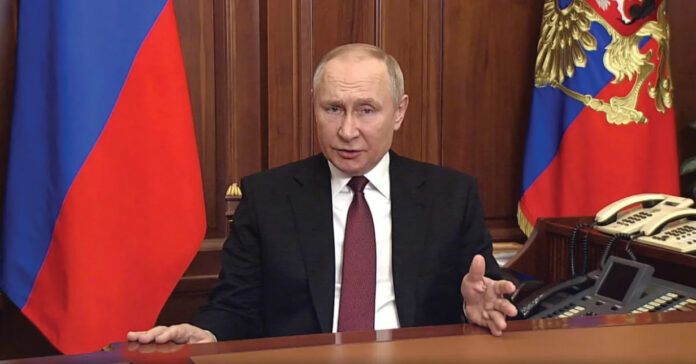 ASHGABAT
Russian President Vladimir Putin on Thursday rejected British Prime Minister Boris Johnson’s charge that if he were a woman he would not have invaded Ukraine.
Speaking at a news conference in the early hours of Thursday during a visit to Turkmenistan, Putin pointed to former British leader Margaret Thatcher’s decision to send troops into the Falklands as a rebuttal of Johnson’s theory.
Johnson on Wednesday dubbed Putin’s decision to launch what Moscow calls a “special military operation” against Ukraine a “perfect example of toxic masculinity” and mocked Putin’s macho posturing.
Hitting back, Putin told reporters: “I just want to recall the events of recent history, when Margaret Thatcher decided to launch military operations against Argentina for the Falkland Islands. So, a woman took the decision to launch military action.
“Therefore it’s not an entirely accurate reference from the British Prime Minister to what is happening today.”
The Russian leader went on to criticise Britain’s move, 40 years ago, to respond militarily to Argentina’s attempt to seize the sparsely populated British-run islands in the South Atlantic.
“Where are the Falkland Islands and where is Britain?” Putin asked. “Thatcher’s actions were dictated by nothing less than imperial ambitions and (a desire to) confirm their imperial status.”
Moscow repeatedly rails against Western military interventions in the likes of the former Yugoslavia, Afghanistan and Iraq as examples of Western imperialism and hypocrisy.
But during his two-decade rule Putin himself has faced multiple charges of imperialism, wanting to forcefully expand Russia’s borders and influence across the former Soviet space, and has himself said he wished he could reverse the collapse of the Soviet Union.
Russia’s February 24 invasion of Ukraine has destroyed numerous cities, killed thousands of civilians and forced millions from their homes across Ukraine.