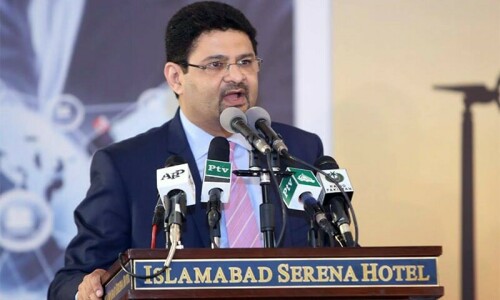 Former finance minister Miftah Ismail on Sunday termed the government’s decision to not increase the petroleum development levy (PDL) this month without the approval of the International Monetary Fund (IMF) “reckless”.

He maintained, however, that what the previous PTI government did with the country was “unforgivable”.

Ismail made the comments in response to PTI leader and former finance minister Shaukat Tarin’s tweet, in which the latter called out the PML-N for its alleged doublespeak.

“We were blamed for violating IMF conditions. According to Miftah sahib, they did not wait to get clearance from MD IMF before announcing the fuel prices. Clear doublespeak,” he tweeted.

In response, Ismail said the PTI government had indeed violated the agreement with the IMF.

Terming that subsidy “unfounded and unsustainable”, Ismail claimed the PTI nearly bankrupted the country. He added that as finance minister, he had gone to the IMF and saved the country from default.

“Not increasing PDL this month without IMF approval is reckless, but what PTI did with our economy was unforgivable,” he insisted.

This was the second time Ismail pointed out in as many days that his government did not get IMF approval before freezing petroleum levy.

While addressing an event in Karachi on Saturday, Ismail said Prime Minister Shehbaz Sharif’s adviser on Establishment Ahad Cheema had asked him to discuss with the IMF managing director if petrol prices could be frozen for three months but “I said that I would die but not ask this.”

“In any case … I asked the MD if we could freeze the tax (PDL) for three months. The answer did not arrive and the government unilaterally did it. So may God have mercy.”

Ismail’s comments come days after the PML-N government, for which he served as the finance minister until last week, announced a cut of around five per cent in the prices of all petroleum products for the next fortnight.

Currently, the government is charging Rs12.58 per litre PDL on HSD, Rs15 per litre on kerosene, Rs10 on LDO and Rs30 per litre on High Octane Blending Component. Moreover, the prices of petrol and HSD also include Rs22 per litre custom duty.