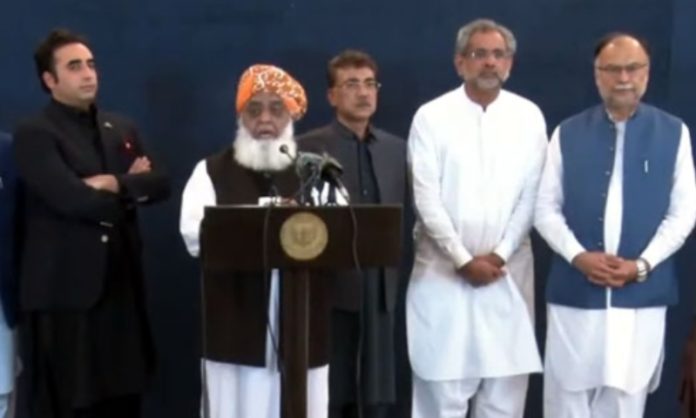 ISLAMABAD: In a late-night press conference following the Supreme Court’s refusal to constitute a full court to hear the plea against the Punjab chief minister’s election, the ruling coalition announced a boycott of the proceedings.

Leaders of the ruling parties, who termed the SC decision “unacceptable”, joined heads at the Prime Minister Office to chalk out their future line of action. The late-night meeting was chaired by Prime Minister Shehbaz Sharif.

Addressing the press conference after the meeting on Monday night, Jamiat Ulema-i-Islam (JUI-F) chief Maulana Fazlur Rehman said any verdict announced by the three-judge bench hearing the case would be considered partial. Rejecting the apex court’s refusal to a full court, he said the government would not appear before this bench.

“The government wants no interference in its affairs and seeks a continuation of its policies for which it will also suggest parliament legislate to ensure respect to the people and judiciary’s verdicts.”

Pakistan Muslim League-Nawaz (PML-N) senior vice president Shahid Khaqan Abbasi said the case at hand would be a test for the SC. “Justice demands that if a question has been raised over a bench or judge, they should recuse themselves. This is supremacy of the law. It is for this bench to decide how their conduct will go down in history.”

In a tweet, PML-N vice president Maryam Nawaz claimed that people now knew decisions in the country were made over personal likes and dislikes.

Earlier in the day, Interior Minister Rana Sanaullah, speaking outside the Supreme Court building, had hinted that the ruling coalition would boycott the case proceedings if a full court wasn’t formed.

Resuming the hearing of the government’s appeal for the last time after multiple breaks late at night, the court rejected the plea to constitute a full court, and adjourned the hearing till Tuesday morning (today).

Earlier in the morning, coming down hard on the judiciary and questioning its impartiality, all parties of the coalition government banded together and expressed ‘no confidence’ on the three-judge SC bench headed by Chief Justice Umar Ata Bandial hearing a plea against the election of Hamza Shehbaz as the chief minister, and reiterated their demand for a full court to decide the case.

In the high-profile press conference held at the PM Office, the top leadership of all parties in the coalition government said they won’t acknowledge any decision announced by the three-member bench, which they alleged was inclined towards the opposition Pakistan Tehreek-i-Insaf and ‘favouring’ the party, but were ready to accept the decision of a full court.

Kicking off the press conference, PML-N’s Maryam Nawaz said there were many respected judges in the apex court, and questioned why they were not hearing cases. “One or two judges, who have always been anti-PML-N and anti-government, are repeatedly included in benches,” she remarked, adding that “bench-fixing is as big a crime as is match-fixing”.

She alleged that court decisions were favouring the PTI despite the fact that it consistently mocked the judicial system. She questioned the state of justice in the country where decisions were handed out in favour of those who “abuse and bully institutions” the most.

Ms Nawaz also cited several examples of the PML-N leadership’s legal woes, claiming its leaders were being discriminated against. About her cousin, Hamza Shehbaz, being asked to carry on as the CM with limited powers, she asked: “Have you ever heard of a trustee chief minister?” Since the day Hamza was elected, he was not allowed to work. “He has been shuttling between parliament and courts. What kind of justice is this?”

Mentioning the April 16 election for the Punjab CM, the firebrand PML-N leader said 25 provincial lawmakers were de-seated by the court on a petition of the PTI for voting for Hamza. “Ninety-five per cent independent jurists said it was tantamount to rewriting the Constitution… 25 PML-N members were added to the PTI tally… the PML-N votes were deducted and the PTI’s increased.”

Answering a question as to why no action was being taken against former premier Imran Khan despite the ruling parties leveling so many allegations against him, and the status of the cabinet committee formed to try PTI leaders under Article 6, Ms Nawaz said they could only do something once they were done facing the many court cases against them.