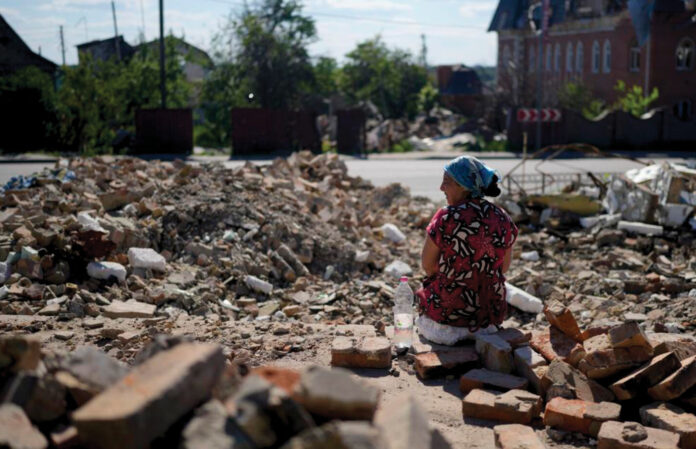 Moscow is deploying troop reinforcements in eastern Ukraine
KYIV
Russia claimed Tuesday it has occupied large swaths of eastern Ukraine after a relentless, weekslong barrage and the recent deployment of more troops.
Russian Defense Minister Sergei Shoigu said Moscow’s forces have control of 97% of the Luhansk region.
Russia has declared that fully capturing the entire Donbas, which includes the Donetsk and Luhansk regions and where Russia-backed separatists have fought the Ukrainian government since 2014, is its main goal in the invasion of its neighboring country which began Feb. 24. The region recently has been bearing the brunt of the Russian onslaught.
It’s not clear whether Russia would try to expand its offensive elsewhere in Ukraine if it takes the Donbas. Russian Foreign Minister Sergey Lavrov warned Monday that if the West provides Ukraine with long-range rockets capable of reaching Russian territory, Moscow will respond by pressing its offensive deeper into Ukraine.
Early in the war, the Russian troops also took control of the entire Kherson region and a large part of the Zaporizhzhia region in the south. Russian officials and their local appointees have mulled plans for those regions to either declare their independence or be folded into Russia.
But while the Kremlin’s forces have superior firepower, the Ukrainians defenders — among them the country’s most well-trained forces — are entrenched and have shown the capability to counterattack.
Shoigu, the Russian defense minister, claimed that Russian forces have seized the residential quarters of Sievierodonetsk and are fighting to take control of an industrial zone on its outskirts and the nearby towns.
Sievierodonetsk, the administrative center of the Luhansk region, has recently been the focus of the Russian offensive. Sievierodonetsk and nearby Lysychansk are the only two Donbas cities holding out against the Russian invasion, which is being helped by local pro-Kremlin forces.
Shoigu added that the Russian troops were pressing their offensive toward the town of Popasna and noted that they have taken control of Lyman and Sviatohirsk and 15 other towns in the region.
Popasna is a town with a pre-war population of 20,000 located about 30 kilometers (nearly 20 miles) south of Sievierodonetsk.
Shoigu said 6,489 Ukrainian troops have been taken prisoner since the start of the military action in Ukraine, including 126 over the past five days.
Moscow is deploying troop reinforcements in eastern Ukraine as a Russian artillery barrage aimed to grind down Ukrainian defenses, a Ukrainian official said.
Ukrainian presidential adviser Mykhailo Podolyak urged his people not to be downhearted about the battlefield reverses.
“Don’t let the news that we’ve ceded something scare you,” he said in a video address. “It is clear that tactical maneuvers are ongoing. We cede something, we take something back.”
Luhansk governor Serhiy Haidai conceded that Russian forces control the industrial outskirts of Sievierodonetsk.
“Toughest street battles continue, with varying degrees of success,” Haidai told The Associated Press. “The situation constantly changes, but the Ukrainians are repelling attacks.”