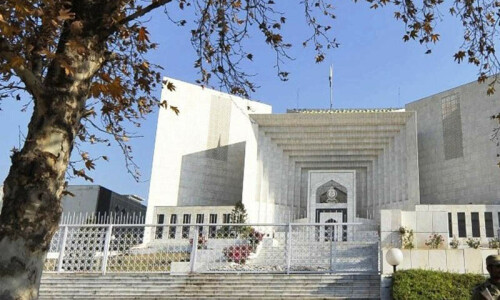 The Supreme Court (SC) declared an agreement signed between the Pakistan government and two international firms — Antofagasta PLC and Barrick Gold Corporation — in March for the revival of the long-stalled Reko Diq mining project as legal on Friday.

The verdict was announced by a five-member SC bench, headed by Chief Justice of Pakistan Umar Ata Bandial, on a presidential reference that sought the SC’s opinion on whether a 2013 judgement by the apex court prevented the federal and provincial governments from entering into the implementation agreement afresh.

In its 13-page short order issued today, the court observed that the government had entered the agreement after consulting experts, as per court directives, and the Balochistan Assembly was taken into confidence regarding the agreement.

The order stated that the law did not allow agreements on national resources in violation of the Constitution and that provinces could amend laws pertaining to minerals.

The court observed that the Balochistan Assembly was briefed on the matter and elected representatives did not raise any objections.

Moreover, the order said, the agreement met environmental requirements and Barrick Gold Corporation assured that labour rights would be considered during the implementation of the project.

Barrick Gold Corporation assured that laws for wages would be abided by and most of the labour force would be recruited from Pakistan, the order said.

The court was further told that the project would be used for investing in social initiatives and skill development schemes would also be launched under it, the order added.

There was nothing illegal in the new Reko Diq agreement, the court concluded, adding that it was also not in violation of its 2013 judgement.