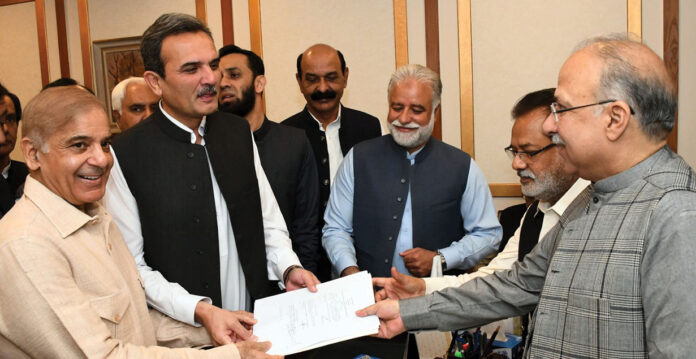 Files papers for PM’s post: PTI fields Qureshi for slot
ISLAMABAD
Pakistan Muslim League-Nawaz (PML-N) President Shehbaz Sharif has expressed the commitment to take forward the country and make it a great nation whilst forgetting bitterness of the past.
In his victory speech after ousting the Pakistan Tehreek-e-Insaf (PTI) government through a no-confidence motion against Prime Minister Imran Khan in the wee hours of Sunday, Sharif said, “We want to heal the woes and wounds of the nation. We will not take revenge from anybody.”
He said there will be no injustice or excesses and innocent people will not be sent behind the bars. He however, said that the law will take its course. The PML-N president said, “We respect the judiciary. There will be no interference in dispensation of justice as the allied parties have great respect for the judiciary.” He vowed to run the affairs of the country in consultations and taking along the institutions. He vowed to transform the country according to the vision of founder of Pakistan Quaid-e-Azam Muhammad Ali Jinnah, ensuring rule of law and justice in the society.
He recalled that opposition leaders including PML-N Quaid Nawaz Sharif faced jail, adding that he did not want to be stuck up in the bitterness of the past and rather “we want to move forward and make Pakistan a great nation, forgetting the past bitterness.”
Shehbaz also expressed resolve to mitigate sufferings of the common man and work for welfare of downtrodden segments of the society. He praised allied parties for exhibiting great unity and making the motion against the prime minister successful. He was confident that this unity will again build Pakistan.