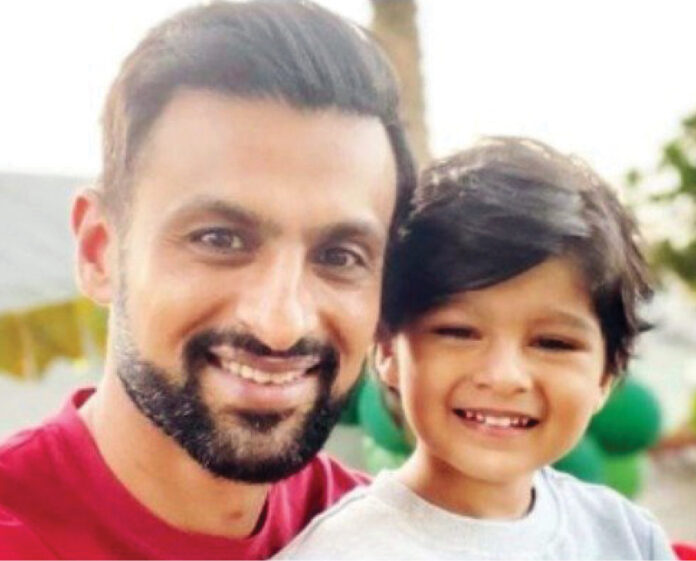 Islamabad
Pakistan all-rounder Shoaib Malik Tuesday told his fans that his son, Izhaan Mirza Malik, who hadn’t been well lately, was getting well.
The cricketer, who keeps fans in the loop about his personal and professional life with his social media posts, once again took to Twitter, but this time to express gratitude towards the Twitterati who “poured in” their love and wishes for Izhaan’s early recovery.
Shoaib also congratulated the national squad for whitewashing the Pakistan vs Bangladesh T20I series in Dhaka.
“Thank you, all, for pouring in your love & wishes for Izhaan, he is feeling better now and recovering fast… Alhamdolillah. Also congratulations to all the boys for winning the T20I series against Bangladesh,” Shoaib wrote.
It was Izhaan’s illness due to which Shoaib had to miss the final fixture of the series that concluded on Monday with Pakistan winning all three of the matches.
The Pakistan Cricket Board had announced in a statement ahead of the match that Shoaib will not be available for the third T20I match against Bangladesh.
According to PCB, Shoaib was to will depart for Dubai at 10:00am local time to see his son.
Little Izhaan’s illness had been revealed earlier this week when Shoaib’s wife, Sania Mirza gave fans a peek into her iPhone.
“When you have a sick kid and functioning on 2 hours of sleep. Going with the trend though [laugh emoji] #iphonelockscreen #reelkarofeelkaro,” the Indian tennis star wrote in her Instagram post.