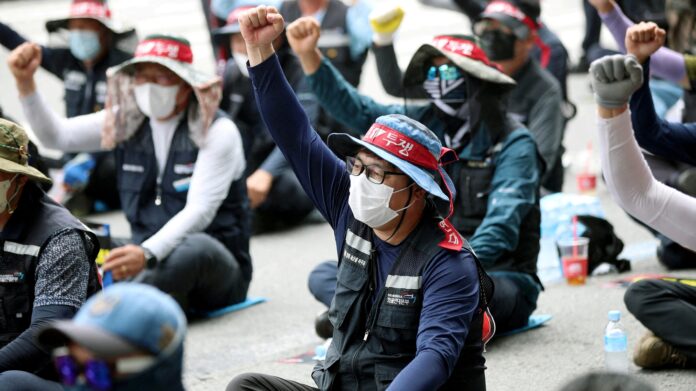 SEOUL
A strike by South Korean truckers has cost key industrial sectors more than $1.2 billion in lost production and unfulfilled deliveries, the government estimated on Monday, as the damage spreads deeper throughout the economy.
The strike, now in its seventh day, has forced steelmaker POSCO (005490.KS) to halt some plants due to a lack of space to store unshipped products. Hyundai Motor (005380.KS) has cut production for some assembly lines and cement makers have also reduced output.
Petrochemical firms were also in pain with average daily shipments from factories having tumbled 90% due to the strike as truckers target major petrochemical complexes in Ulsan, Yeosu and Daesan, an industry association said.
It was not immediately clear if petrochem firms were also cutting production.
The Cargo Truckers Solidarity union is protesting soaring fuel prices and demanding minimum pay guarantees.
Four rounds of negotiations with the government have failed to find a compromise.
The 6,600 members or about 30% of the union were striking on Monday, according to a transport ministry estimate.
In its first such calculation, the industry ministry said in a statement that the strife has cost automobile, steel, petrochemical and cement sectors about 1.6 trillion won ($1.2 billion) in lost production and failed deliveries between June 7-12.
There have been as yet no reports of major production disruptions at Samsung Electronics (005930.KS), SK Hynix (000660.KS) and other semiconductor firms.