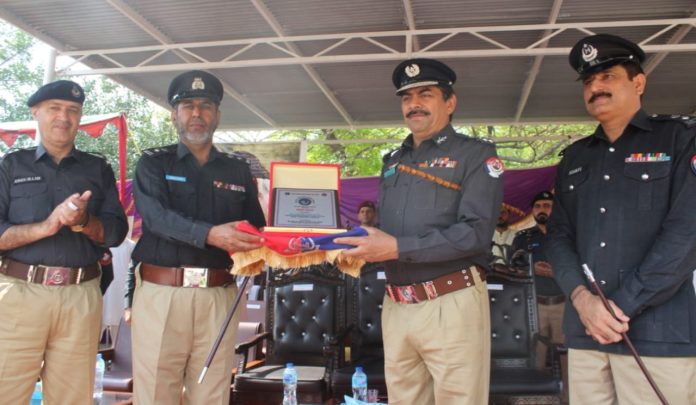 Haqnawaz Shinwari.
Peshawar
PESHAWAR: Deputy Inspector General (DIG) Training Faroz Shah has appreciated the role of Special Police Force in fighting against the terrorism and maintaining peace in Khyber Pakhtunkhwa, saying the force is being considered as valuable asset of thepolice force in the province.
The SpecialPolice Force personnel played a key role in maintaining law and order situation in the province when terrorist’s attacks on security forces and other law enforcementagencies were rampant.
He made these remarks while addressing a passingout parade ceremony of the Special Police Force at Police Training School Kohat here on Friday.
Director School of Training Abdul Hai, District Police Officer Kohat Shafiullah Khan Gandapur SP Investigation, community representatives and officials of government departments attended the ceremony. DIG Training Feroz Shah lauded the sacrifices made by Khyber Pakhtunkhwa police,adding that history will remember the gallantry of the police for centuries to come. “Khyber Pakhtunkhwa Police is fully equipped with required skills to face the challenges of law and order situation,” he added and said providing security to people is the key priority of the police force.
Mr Feroz Shah added that the police have bravely fought against the criminal elements inthe society and many embraced martyrdom in line of duty. He said that the biggest asset of the police is the cooperation of people as without society crimes ratio cannot be mitigated. It is the responsibility of the Special Police Force to spend their energy on collection of information about those elements who wanted to create unrest in the society.
The DIG Training urged the pass out Jawans of the force to perform their duties with dedication and honesty and utilize theirs kills they obtained during the training for serving humanity. He said that we will all stand, fight, and protect our motherland, adding that the provincial government was taking keen interest in making the police a highly professional force.
During the ceremony, 645 jawans of the Special Police Force were passed out and DIG Training distributed shields and certificates to the personnel who showed the best performance during the training. Later,DIG Training Feroze Shah visited different parts of the Police Training School and laid flowers on the martyrs’ memorial.
During the ceremony, Director School of Training Abdul Hai presented a special souvenir to DIG Training.