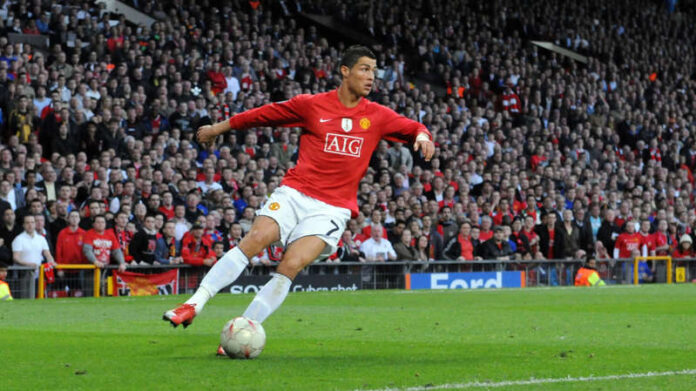 Just as we were losing hope that romance in football was completely dead, Cristiano Ronaldo comes to the rescue!

Just as we were losing hope that romance in football was completely dead, Cristiano Ronaldo comes to the rescue!

But when news broke that Ronaldo wanted out of Juventus and seemed destined to go back on his word and sign for Manchester City, that was the final nail in romance’s coffin.

Then, in the blink of an eye, Cupid got to work and struck the Portuguese star with his strongest arrow, which nestled into his rock-hard pec and straight through his heart. The 36-year-old came over all nostalgic, and when he heard that Man Utd fancied one last dance for old times’ sake, he couldn’t say no. The story might have been a little different in reality, but let us dream.

Man Utd confirmed on Friday afternoon that Ronaldo was back, stunning the football world.

He is ready to send his career almost full circle to return to the place where he made his name, and try to win another Champions League with the club where his trophy obsession began.

Ronaldo’s name will be printed on the back of millions of Man Utd jerseys, as fans flock to wear the icon’s surname on their back with pride. But which numbers are available for him to choose from?

Let’s get the elephant in the corner of the room out of the way. CR7 will want the number seven jersey, which is currently occupied by forward Edinson Cavani. It’s rare for clubs to change shirt numbers after the season has begun, but it has happened before, so we can’t rule it out completely.

That means that unless Cavani’s career lies away from Old Trafford (which seems unlikely) Ronaldo will need to convince the Uruguayan to give up his current jersey.

Otherwise, he could be left in the same position as he was upon joining Real Madrid, when Raul politely told him that he was the only number seven in town. Ronaldo was forced to settle for the number nine shirt at the beginning of his career in Spain, a jersey currently worn by Anthony Martial.

Once again, he’ll need to use his persuasive charm to claim that number, unless the Frenchman ends up finding himself pushed out of the Old Trafford door. Martial has already had to give up the nine shirt before and he’d probably feel pretty hard done by if he has it taken off him again.

In terms of numbers that are actually available right now, the first free option is the number 12, which was most recently worn by Chris Smalling and Ben Foster. Big shoes to fill. The number 15 is also a possibility after Andreas Pereira left the club to join Brazilian outfit Flamengo.

Timothy Fosu-Mensah’s exit in January 2021 has left the number 24 up for grabs, which was famously occupied by Darren Fletcher for a number of years. Gerard Pique and Darron Gibson both donned the number 28 during their stints at Old Trafford, and it is free for Ronaldo to continue their legacy.

The number 30 is also an alternative, while other than Nemanja Matic’s 31, Donny van de Beek’s 34 or Scott McTominay’s 39 jersey, the rest of the numbers north of 30 are all available.

For those hoping that Ronaldo has double vision and is eyeing the 77 shirt, the Premier League tend to reject such requests, with high numbers reserved for youth players – Renato Sanches tried to take 85 at Swansea but was denied, instead settling for 35.