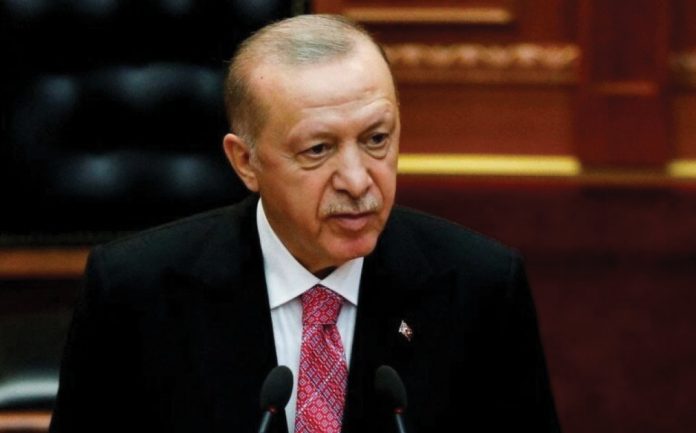 After grain deal
Erdogan says he wants to avoid “another Chernobyl”
KYIV
Turkish President Recep Tayyip Erdogan has offered to mediate in the standoff over a Russian-occupied nuclear power station in war-torn Ukraine that has raised fears of an atomic disaster.
Alarm has grown in recent weeks over shelling hitting the area of Europe’s largest nuclear plant, Zaporizhzhia.
Erdogan on Saturday told his Russian counterpart Vladimir Putin “that Turkey can play a facilitator role in the Zaporizhzhia nuclear power plant, as they did in the grain deal,” the Turkish presidency said.
During their phone call on Saturday, Erdogan and Putin agreed to talk further in Samarkand on the sidelines of the Shanghai Cooperation Organisation summit on September 15-16, the presidency said.
However, there was no immediate mention of Erdogan having also spoken to Ukraine’s President Volodymyr Zelensky on Saturday to offer his mediation.
Ukraine on Friday claimed to have bombed a Russian base in the nearby town of Energodar, destroying three artillery systems as well as an ammunition depot.
As Ukraine — one of the world’s largest grain exporters — was forced to halt almost all deliveries after Russia invaded in late February, raising fears of a global food crisis, Kyiv and Moscow in July inked a deal, with the United Nations and Turkey acting as guarantors, for resumption of exports of grain across Black Sea ports.
Last month, Erdogan warned of the danger of a nuclear disaster when he visited Lviv for talks with the Ukrainian leader. The Turkish leader said he wanted to avoid “another Chernobyl”, referring to the world’s worst nuclear accident in another part of Ukraine in 1986, when it was still part of the Soviet Union.
This week, a 14-strong team from the International Atomic Energy Agency (IAEA) visited Zaporizhzhia, with the UN nuclear watchdog’s chief Rafael Grossi saying the site had been damaged in fighting.
Russia’s envoy to Vienna, Mikhail Ulyanov, said six IAEA inspectors would stay behind for several days and that two more would remain there “on a permanent basis”.
Ukraine has accused Russia of storing ammunition at Zaporizhzhia and deploying hundreds of soldiers there. It also suspects Moscow is intending to divert power from the plant to the nearby Crimean peninsula, annexed by Russia in 2014.
‘Gas weapon’
Group of Seven (G7) major industrial democracies earlier on Friday vowed to move urgently to set a price cap on Russian oil imports, a crucial source of revenue for Moscow. As if on cue, Russian gas giant Gazprom said it had halted gas deliveries to Germany for an indefinite period, as there were leaks in a turbine. Its German manufacturer said that was not a valid reason to halt gas flows.
On Saturday, EU Economy Commissioner Paolo Gentiloni, however, said the European Union was “well prepared” in the event of a total halt in Russian gas deliveries, thanks to storage capacity and energy-saving measures.
“We are well prepared to resist Russia’s extreme use of the gas weapon,” he told reporters on the sidelines of an economic forum organised by The European House — Ambrosetti.
In the EU, “gas storage is currently at about 80 percent, thanks to the diversification of supplies,” even if the situation varies from one country to another, Gentiloni said.
Aegean islands
Meanwhile, Turkiye accused Greece of occupying islands in the Aegean Sea that have a demilitarised status, as Erdogan said Turkiye was prepared to “do what is necessary” when the time comes.
Historic rivals while also being fellow members of Nato, Turkey and Greece have been at odds over issues ranging from overflights and the status of Aegean islands to maritime boundaries and hydrocarbon resources in the Mediterranean, as well as ethnically split Cyprus.
Ankara has recently accused Athens of arming the demilitarised Aegean islands — something Athens rejects, but Erdogan had not previously accused Greece of occupying them. “Your occupying the islands does not bind us. When the time, the hour, comes, we will do what is necessary,” Erdogan said, speaking in the northern province of Samsun.
Greece reacted by saying it will not follow Turkey in its “outrageous daily slide” of statements and threats.
“We will inform our allies and partners on the content of the provocative statements … to make it clear who is setting dynamite to the cohesion of our alliance during a dangerous period,” the foreign ministry said.
Turkey has recently been angered by what it said is harassment of its jets by Greek forces. Ankara has said that S-300 air defence systems used by Greece had locked on to Turkish jets during a routine flight.
Turkey celebrated Victory Day on Aug 30, a national holiday commemorating Turkish forces driving out Greek forces in 1922. Ankara says the Aegean islands were given to Greece under the 1923 and 1947 treaties on condition that it does not arm them. Foreign Minister Mevlut Cavusoglu has repeatedly said Turkey would start questioning Greek sovereignty over the islands if Athens persisted in arming them.