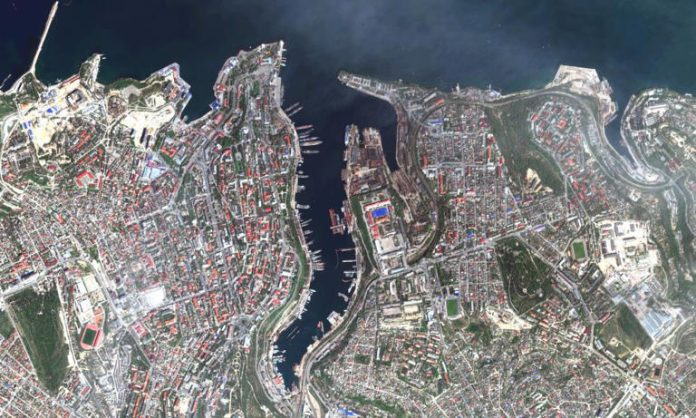 Ukraine has launched a fresh strike on Russia’s Black Sea fleet headquarters at Sevastopol, where officials in the annexed Crimean peninsula said that at least one drone had been shot down by air defences.

The reported attack on Saturday morning – a day after explosions erupted near military bases in Russian-held areas of Ukraine and Russia itself – came amid cautious optimism elsewhere as two more grain ships left a Ukrainian port.

The shipments, from Chornomorsk port, brought the total number to leave Ukraine’s Black Sea under a UN-brokered deal to 27.

While there was no apparent major damage following the reported unmanned aerial vehicle (UAV) attack on Sevastopol, which has not been independently verified by the Guardian, observers said it demonstrated Ukraine’s ability to strike deep behind Russian lines at prestige targets.

Video shared on Twitter appeared to show Russian air defences attempting to engage the UAV and dark plumes of smoke rising from the city.

Mikhail Razvozhayev, Sevastopol’s governor, wrote on Telegram that a drone hit the roof of the headquarters on Saturday and said there were no casualties, reports Russian news agency Tass.

“I am at the [Black Sea] fleet’s headquarters now. A drone hit the roof here 25 minutes ago. Unfortunately, it was not downed … There are no casualties,” he wrote.

Meanwhile, Ukraine’s defence ministry on Saturday said its forces had killed a total of 44,900 Russian personnel – a rise of 200 on the day before.

On Friday, the US said for the first time that it would provide Ukraine with ScanEagle surveillance drones, mine-resistant vehicles, anti-armour rounds and howitzer weapons in a new £655m aid package to help its efforts to take back Ukrainian territory.

“These capabilities are carefully calibrated to make the most difference on the battlefield and strengthen Ukraine’s position at the negotiating table,” Antony Blinken, the US secretary of state, said.

Volodymyr Zelenskiy, the Ukrainian president, said in response to the announcement that it was “another important step to defeat the aggressor”.

Wednesday will mark six months of war in the region since Russia’s invasion of Ukraine.

While Russia has made gains in the east, it has been put on the defensive in other regions as Ukraine scales up its attacks in the Black Sea peninsula of Crimea, which was seized by Russia in 2014.

Last week, a total of nine Russian warplanes were reported destroyed at a Crimean airbase.

Russian leaders have warned that such strikes indicate an escalation in the conflict, powered by the US and Nato allies.

In its latest intelligence update on the conflict, Britain’s Ministry of Defence (MOD) said last week that it saw “only minimal changes in territorial control along the frontline”.

In Donbas, it said Russian forces have approached the outskirts of Bakhmut, but have not broken into the city. In the south-west, it reported that neither Ukrainian nor Russian forces had made advances on the front line in occupied Kherson , but added: “Increasingly frequent explosions behind Russian lines are probably stressing Russian logistics and air basing in the south.”

While it predicted that significant changes were unlikely in the next week, the MOD said: “Over the coming months the initiative will go to whichever side manages to generate a credible, committed force for offensive operations.”