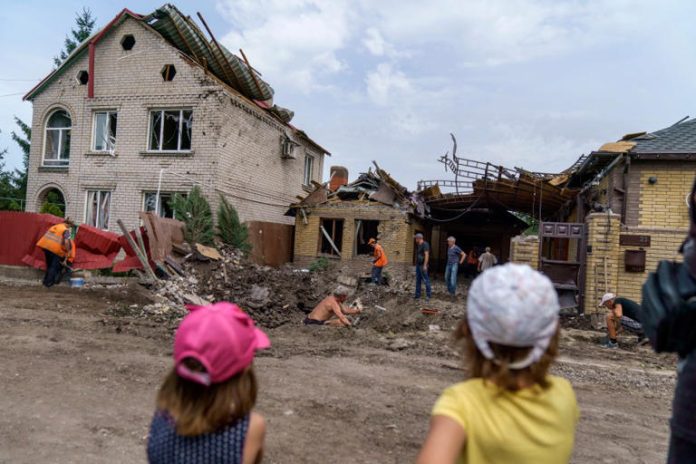 But the missiles, only recently confirmed to be in the hands of Ukraine’s air force, are just one part of a complicated strategy to expel Kremlin forces completely from the country, a Ukrainian fighter pilot told The Hill.

The pilot, who identifies himself by his call sign “Juice,” said the country’s air force has recently used the anti-radiation missiles to suppress Russian air defense systems.

Their presence in Ukraine was confirmed for the first time Monday by Under Secretary of Defense for Policy Colin Kahl, who said the missiles have been included in several recent lethal aid packages from the United States and make existing Ukrainian capabilities more effective.

“It’s a great support for us. Actually, it’s one of the most advanced weapons that we have at the moment,” Juice said, but stressed that the missiles are only “one part of the complex mission.”

Though Department of Defense officials have not identified the specific anti-radiation missiles or the amount sent, CNN reported that the munitions are AGM-88 High Speed Anti-Radiation Missiles, which can hit targets more than 30 miles away.

“They are very expensive and we have a limited number,” Juice said, adding that they have to be selective in their targeting, taking out the Russian army’s “most dangerous” long-range missile systems.

The U.S. anti-radiation missiles are thought to be involved in the destruction of at least five Russian anti-aircraft artillery systems, four S-300 long-range surface-to-air missile systems and a Pantsir-S1 missile system, the Kyiv Post reported Monday.

Such battlefield successes are key in breaking through intense, yet stagnant, fighting along what is considered a 2,000 kilometer (1,243 mile) front line, dividing Ukraine from the Russian-occupied territory in the east and south.

But the nation needs more help, according to Ukrainian President Volodymyr Zelensky, who has continued to push for the international community to step up its support. The aid is critical for Ukraine’s armed forces to push Russia back by destroying its supply lines and breaking down its will to fight before winter, when conditions could change the battlefield and the geopolitical stage, he warns.

To that end, the Pentagon has signaled it is preparing to scale up its collaboration with Ukraine’s air force — a critical component in the country’s defense — to include U.S. service members beginning to train Ukrainian pilots on advanced American fighter jets.

“There are real questions about what would be most useful in terms of assisting the Ukrainian Air Force and improving its capabilities. It’s not inconceivable that down the road, Western aircraft could be part of the mix on that, but the final analysis has not been done,” Kahl said in a briefing with reporters.

Even as Ukrainian ground troops put to effective use American-provided High Mobility Rocket Systems (HIMARS) and multiple launch rocket systems — celebrated for their ability to disrupt and destroy Russian military supply lines — Juice said that he hopes the U.S. will help with the needs of the air force.

“I totally understand that HIMARS and Howitzers, UAVs, all of that are critically important for our armed forces,” he said. “But we are still saying that the air force, in modern war, is too important, too critical. And we need to improve our capabilities.”

Gorgan said it is impossible for Ukraine to retake occupied territory from the Russians without quickly building up its air force capacity.

Gorgan launched his initiative, called the Training Center for Pilots of Advanced Military Aircrafts, alongside Andrey Vavrysh, CEO of SAGA Development, and in coordination with the Ukrainian Ministry of Defense.

Gorgan said the idea for this initiative came while fighting in the trenches of eastern Ukraine in March, under intense shelling from Russian forces.

“I thought ‘oh my god, we need this specific airplane, A-10 Thunderbolt, which gives close air support for infantry,’” he recalled.

Gorgan’s initiative focuses on using flight simulators to begin training pilots on the A-10, as well as other advanced aircraft Ukraine hopes to receive.

U.S. lawmakers have identified pilot training as key to beginning the process of delivery of advanced war planes.

A proposal by Rep. Adam Kinzinger (R-Ill.), included in the House-passed version of the National Defense Authorization Act, aims to provide $100 million to train Ukrainian pilots to use American planes.

The list of needs, demands and hopes are long.

The Ukrainians also view attack helicopters as critical in carrying out a robust defense — Juice brought up Boeing’s AH-64 Apache helicopters, though conceded it is unlikely, and that they would settle for the Bell AH-1 SuperCobra or Bell AH-1Z Viper.

“Of course I’m not a helicopter expert, but in general I know their needs and all these helicopters are the platforms for modern aiming systems, reconnaissance and modern precision missiles,” he said.

“We could provide the very precision attacks without any civilian casualties … exactly, precisely, to target, and from large distances to be safe from the enemy’s air defense.”

The Ukrainian air force has long been in touch with the U.S. Air Force, and since the start of the invasion, Juice said, the Americans have provided not only advice in those first few critical weeks, but also friendship.

“They are trying just to help, just by any possible way, even just a friendly conversation, ‘how are you, are you still alive?’” he says with a laugh, but adds more seriously that the pilots consider each other “brothers in arms,” referring back to a tragic training accident in 2018 when both a Ukrainian and an American pilot were killed.

“U.S. Air Force became the real brothers in arms for us, with blood on our soil,” he said, adding that the 2018 exercise was critically important in their training as it was designed specifically to prepare against a full-scale Russian invasion — four years after Moscow had seized territory in Ukraine’s east and on the Crimean peninsula.

“We understood that, these fallen guys, won’t ask [us not] to continue, their wish was to make this, make it happen, to continue to complete this mission,” Juice said.

“Because the mission of this exercise was to prepare us against war with Russia.”