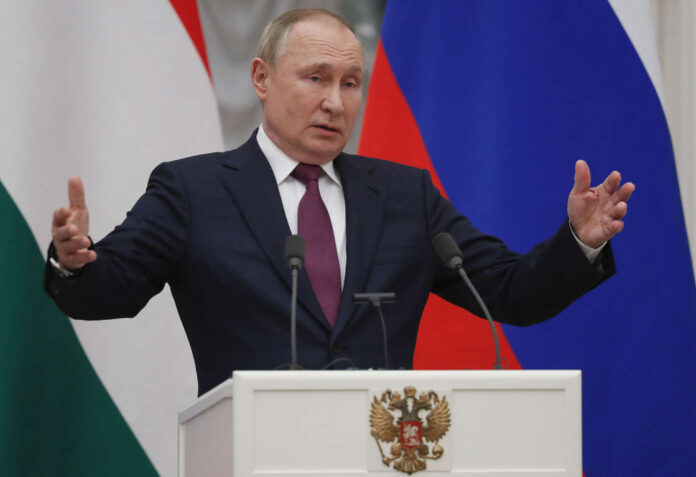 The White House has dismissed claims by Russian President Vladimir Putin that Moscow would be forced into conflict with NATO if Ukraine joins the Western military alliance and attempts to seize back Crimea, which the Kremlin annexed in 2014.

The assertion was Putin’s latest effort to paint Ukraine and its partners in the West as the aggressors in the current crisis, even as Moscow masses more than 100,000 troops around the borders of its smaller neighbor. The Russian leader, who was speaking at a Tuesday news conference alongside Hungary’s prime minister, also accused the United States and NATO of using Ukraine to hem in Russia and ignoring Moscow’s security concerns.

“When the fox is screaming from the top of the henhouse that he’s scared of the chickens, which is essentially what they’re doing, that fear isn’t reported as a statement of fact,” White House press secretary Jen Psaki said Tuesday, as Western officials continued diplomatic efforts to defuse a potential further Russian invasion of Ukraine.

“We know who the fox is in this case,” Psaki added.

Moscow has long taken issue with NATO granting membership to countries in the former Soviet sphere, and has demanded that the organization roll back its forces in Eastern Europe and promise that Ukraine never join the alliance. NATO has refused to change its open door policy, which allows countries to seek entry into the bloc, whose members are bound to defend each other against attack.

“Let’s imagine that Ukraine is a member of NATO, is stuffed with weapons — there are modern offensive systems, like in Poland and Romania — and begins an operation in the Crimea,” Putin said Tuesday. “Do we have to fight with the NATO bloc? Has anyone thought anything about it? It seems not.”

Prime Minister Kaja Kallas of Estonia, which joined NATO in 2004, blamed Russia for starting the crisis. “First of all, it is that Russia is creating this military buildup around Ukraine and then presenting ultimatums,” she said on Washington Post Live Tuesday.

The same day that Putin accused the West of making Ukraine a pawn in a great-power showdown, Russia’s top diplomat at the United Nations indicated Moscow would use its rotating presidency of the Security Council this month to shine a spotlight on contentious issues, such as the use of sanctions as a foreign policy tool.

“We’ve been sanctioned so many times that we’ve lost count,” Russian Ambassador Vasily Nebenzya said at a news conference Tuesday. “The most ironic thing about it is they’re now talking about sanctions before anything happens — preventive sanctions.”

“We’ve been through this a long time already,” he added. “We’ve learned to live with it.”

The United States and Britain are publicly considering imposing some of the toughest-ever sanctions on Russia and on allies of Putin in an effort to deter the Kremlin from a renewed invasion of Ukraine.

Nebenzya also suggested that he would use the U.N. to highlight the Minsk agreements as a political solution to the Ukraine crisis.

The accords, which are viewed as generally favorable to Moscow, were brokered by Berlin and Paris after the Russian annexation of Crimea. The Kremlin has charged the West with failing to push Ukraine to implement the 2015 accord that called for a measure of autonomy in Ukraine’s rebel-held east and an amnesty for Russian-backed insurgents there.

The peace deal was widely condemned by Ukrainians, and officials in Kyiv have warned that implementing it now would destabilize the country. The deal also called on Russia to end its interference in the region and withdraw troops from the Ukrainian border.

Polish Prime Minister Mateusz Morawiecki, also in Kyiv, pledged to help Ukraine with energy, arms and financial aid. “Living close to a neighbor like Russia, we have the feeling of living at the foot of a volcano,” he said.