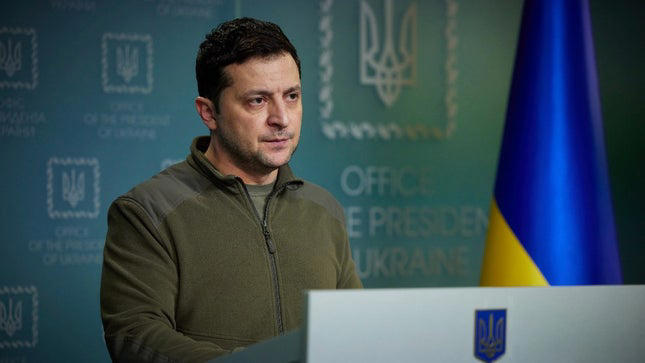 Volodymyr Zelensky has told Ukrainians in an emotional speech to mark 31 years of independence that the country was reborn when Russia invaded.

In a speech aired on the six-month anniversary of Russia’s invasion, Ukraine’s president said that the country no longer saw the war ending when there was peace, but when Kyiv was victorious.

He said that Ukraine would recapture annexed Crimea and occupied areas in the east.

“A new nation appeared in the world on 24 February at 4 in the morning. It was not born, but reborn. A nation that did not cry, scream or take fright. One that did not flee. Did not give up. And did not forget,” he said.

The 44-year-old wartime leader delivered the speech in his trademark combat fatigues in front of Kyiv’s central monument to independence from the Russia-controlled Soviet Union.

“We are holding on for six months. It is difficult for us, but we clenched our fists fighting for our fate,” he added. “Every new day is a new reason not to give up. Because, having gone through so much, we have no right not to reach the end.”

“What for us is the end of the war? We used to say: peace. Now we say: victory.”

He added that Ukraine will not “seek an understanding with terrorists although we understand the Russian language that you came to defend… and killed thousands of people you came to liberate”.