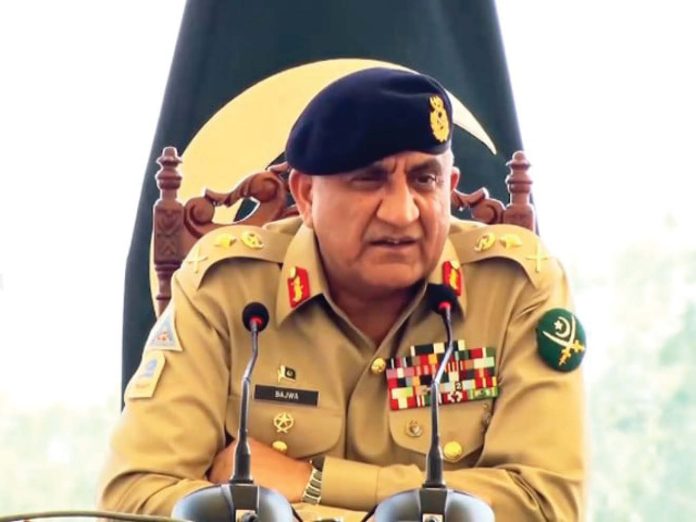 Says families of martyrs will never be left alone | East Pakistan debacle was a political failure
RAWALPINDI
Chief of the Army Staff (COAS) General Qamar Javed Bajwa on Wednesday said Pakistan Army had decided after much deliberation last year that it will not interfere in political matters.
The Army Chief delivered his last speech to the Defence and Martyrs’ Day ceremony at General Headquarters in Rawalpindi on Wednesday and said criticizing the army is the right of the people and political parties.
But, General Bajwa said those who create a rift between the army and the people will always fail. He said the attitude of ‘not agreeing’ with everything should be given up as losing and winning is a part of politics.
“I came to the conclusion that it is because of army’s involvement in politics. So, in February last year, the institution decided that it will no longer interfere in politics,” said the COAS.
General Bajwa was of the view that the army was targeted recently by some political forces with a “false and made-up narrative” and the institution, despite being in capacity to respond to it by all manner, stayed calm but “patience has a limit”
He said that an elected government was termed as ‘selected’ on the excuse of the RTS failure in 2018. “In 2022, the government formed after the no-confidence motion was called ‘imported’. The army’s interference in politics is unconstitutional. The Pak Army has resolved not to interfere in any political matter in future,” he added.
The COAS said that the country is facing severe economic difficulties today. “We will have to advance after learning from the mistakes,” he added. He said that he often wondered why Indian army, the one did the most human rights violations in the world has not become a “target of criticism by its people”.
General Qamar Bajwa said that East Pakistan debacle was political failure not a military one and the nation must also remember the martyrs of the 1971 war. General Bajwa said during the 1971 war, 34000 Pakistani soldiers bravely confronted more than four hundred thousand troops of enemy in East Pakistan so the nation must not forget their sacrifices.
“A nation that forgets its martyrs, disappears from the annals of the history,” said COAS Bajwa. General Qamar Javed Bajwa said that the bereaved families of the martyrs will never be left alone, while a state of confusion was created by creating a fake and false narrative.
He said that the army has decided not to interfere in political affairs, adding that the interference of Army in politics in unconstitutional. Gen Bajwa said, “I feel proud to have served as the commander of this great army for six years, adding that the peace in cities and villages is accredited to the sacrifices of its martyrs.”
The Army Chief went on to say that the army cannot remain silent if there is external conspiracy in the country. “I want to forgive the aggressive behavior against me and the army and move forward,” he said and added he hope the political parties will also change their attitudes and we should learn from the mistakes and move forward.
He said: “. Today, Pakistan is suffering from a serious economic crisis and not a single party can solve these problems, adding that democratic culture must be embraced.” The Army Chief further said that wining and losing is part of politics and every party should accept victory and defeat. Pakistan is a blessing of almighty Allah. He also thanked bereaved families of the martyrs for attending the ceremony.
General Bajwa said that leaving the mistakes of the past behind, the army has decided to move forward and will urge the political forces to do the same in the larger national interest. “People come and go but Pakistan is there to stay,” said army chief.
The COAS lamented what he termed ‘intolerance’ in the country’s political culture and said that after the 2018 General Elections, a political government was termed ‘selected’ by some over a RTS issue while in April, a government which lost the confidence vote termed its successor “imported”.
“It is time political parties promote democratic culture in Pakistan, learn to co-exist and keep aside their differences to put Pakistan on the path of progress,” said the COAS, adding that personalities and personal interests do not matter when the state’s interest is at stake.
The main ceremony of the Defence and Matyrs Day was held at military General Headquarters (GHQ) in Rawalpind. The ceremony was attended by army officers and others to pay homage to the martyrs and victors who rendered supreme sacrifices in defence of the motherland on September 6, 1965.
Every year, the main ceremony to commemorate Defence and Martyrs Day is held on September 6, but it was postponed this year in solidarity with victims of relentless monsoon rains that flooded parts of the country.
The Inter-Services Public Relations (ISPR), in a tweet, said the decision taken in solidarity with the flood-affected people of Pakistan. It added that Pakistan Armed Forces shall continue serving our brothers and sisters struck by unprecedented floods. =DNA