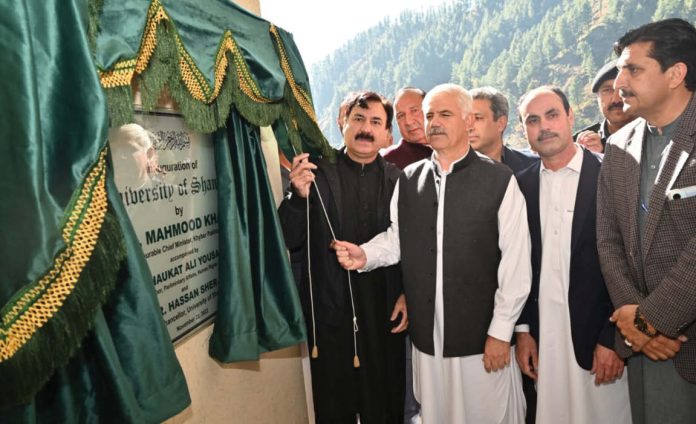 CM announces free education for coal mine workers children at the university
PESHAWAR
Chief Minister Khyber Pakhtunkhwa Mahmood Khan has formally inaugurated the University of Shangla, which is a milestone project towards addressing the shortage of higher educational facilities in the district to a great extent.
Addressing media persons and a public gathering after the inaugural ceremony, the Chief Minister announced free education for children of coal mine workers at the university.
“Shangla University was a much needed project which will contribute greatly towards human development not only in Shangla but the whole adjacent regions,” he added.
It was the desire and effort of the provincial government to ensure that the youth of this area are imparted with quality higher education instead of working in coal mines, he added.
Regarding the kidnapping of coal mine workers from District Shangla in Baluchistan province, the Chief Minister clarified that the government is in touch with the government of Balochistan and expressed hope that the kidnapped workers will be recovered soon.
The Chief Minister stated that despite the financial constraints created by the imported federal government, the provincial government is fully committed to completing the development activities in the province within the stipulated time frame.
However, he said that his government has already communicated its concerns to the federal government and made it clear that if we do not get the legitimate rights of the province, we will not refrain from staging a sit-in in front of the national assembly.
He also announced that the true independence march from KP would move on Saturday towards Iqbal Park in Rawalpindi and said that provincial ministers and MPAs would be leading the march from their respective constituencies.
He said that the provincial government is going all out to ensure that everyone has equal access to higher education, adding that the provincial cabinet, in its 83rd meeting held the other day, has formally approved the launching of an education card scheme with the aim of imparting free education in government colleges.
Touching upon the development projects in district Shangla, the Chief Minister said that the construction of 27 km long Chakisar and Karora to Ajmir roads has been reflected in the portfolio of the Asian Development Bank, which on completion will provide an all-time solution to traffic congestion in the area. He further stated that the notification regarding the establishment of Kana Tehsil in district Shangla has also been issued, which a longstanding demand of the local people was.
With regard to the proposed independence march, the chief minister said that the people from all over the province would participate in the true independence march with zeal and zest.
In a separate event held here at the Chief Minister’s House, Peshawar, a delegation of local bodies representatives called on the Chief Minister at his office.
The Chief Minister on the occasion reiterated that the issues being faced by the local bodies’ representatives would be resolved on priority basis.
In his statement issued after the meeting, Mayor Mardan Himayatullah Mayar said that a high level committee has been constituted in order to resolve the issues after which the call for protest in District Peshawar has been withdrawn.