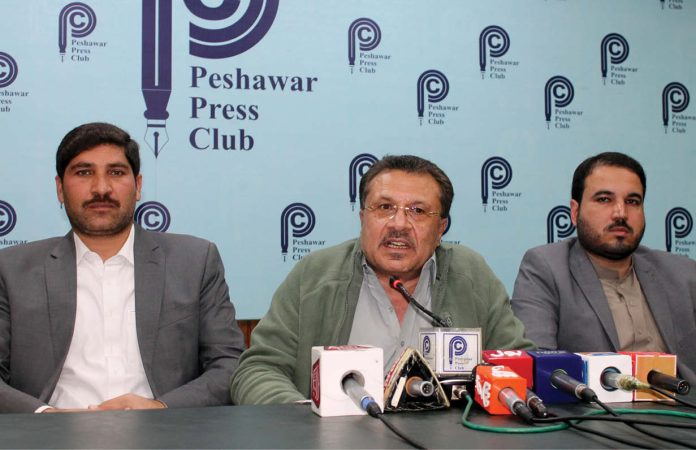 Army chief appointment process will complete soon with mutual consensus, Afridi
PESHAWAR
The provincial secretary information of Pakistan People’s Party (PPP) Amjad Khan Afridi has accused Pakistan Tehreek-e-Insaf (PTI) of creating chaos and lawlessness in the country and casting aspersion on the candidates for the next army chief, adding that the process would be completed very soon without any controversy.
He said “with mutual consultation among senior politicians of PDM , the process of appointment of the Chief of Army Staff will be completed soon”.
Addressing a press conference at the Peshawar Press Club (PPC) PPP provincial secretary information maintained that PTI chief Imran Khan would be made accountable as per the law in the Toshakana reference case, adding that dram of the long march announced by PTI to gain some vested interest would be reached to its logical conclusion very soon.
Amjad Khan Afridi alleged that PTI chairman and former prime minister sold a precious gifted watch with the help of his close associates aboard and now making lame excuses to furnish records of the deal and money he earned from it.
He said that Imran Khan was removed as prime minister after losing a vote of no confidence in parliament but hatched a conspiracy to defame democracy and state institutions by blaming them for an unproven conspiracy.
The PPP leader said that Imran Khan has taken another U-turn by admitting that there was no foreign hand in its government removal, adding that the PTI anti-government long march has failed badly.
“PPP has started preparations to celebrate its party foundation day with great enthusiasm, great devotion and renewal of pledges,” he maintained.
He said that all workers of the party would continue the struggle of Shaheed Benazir Bhutto for democracy.
The PTI’s provincial government has failed to get the net profit of electricity and other rights from the centre, adding that poor performance of the government is evident from the entire step it had taken during more than eight years.