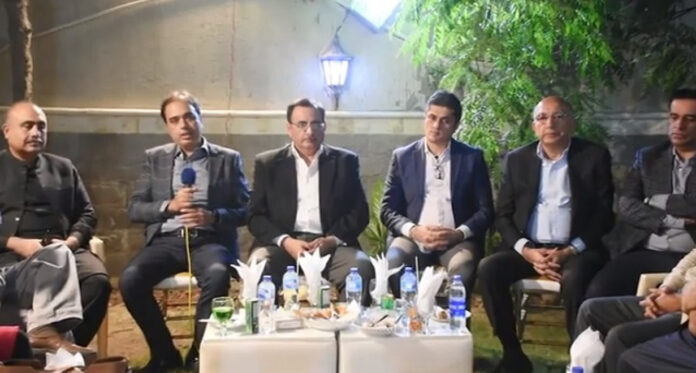 FPCCI Election 2022
KARACHI
Prominent businessman Saquib Fayyaz Magoon along with 21 of his colleagues have returned to the Businessmen’s Panel, which has dealt a major blow to UBG and further strengthened the position of the BMP in the Federation Election 2022.
Saquib Fayyaz Magoon is one of the founders of the Businessmen’s Panel, and has a special place in the business community and is considered to be one of the most beloved leaders of the business community.
Announcing his support for the Businessmen Panel at a reception in honor of Chairman BMP Mian Anjum Nisar, Khurram Saeed and other BMP leaders at his residence, Saquib Fayyaz Magoon said that the BMP is the real voice of the business community, and he has back to his real home
He said that the hard work and dedication of Mian Anjum Nisar, Haji Ghulam Ali, Nasir Hayat Magoon and Khawaja Shazaib Akram in making them work in FPCCI is commendable.
Mian Anjum Nisar, Chairman BMP, said that Saquib Fayyaz Magoon has been our partner in difficult times and we welcome him. Saqib played a vital role in bringing BMP to power in FPCCI for the first time and we are hopeful that he will continue to play a pivotal role in maintaining the tradition of BMP victory.