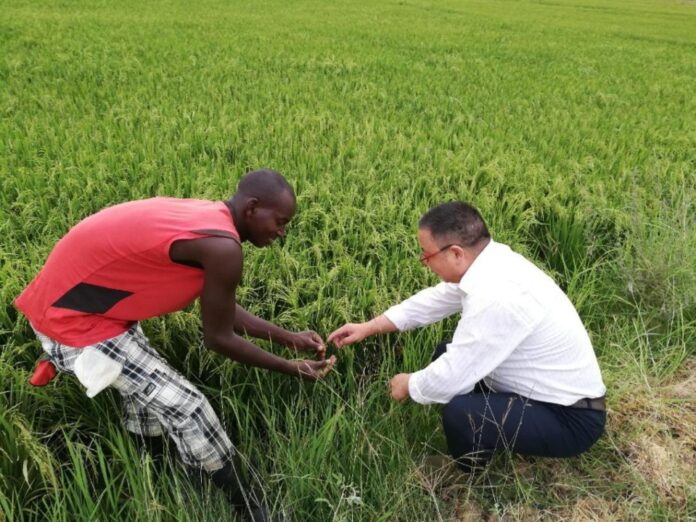 During the past eight years since China proposed the Belt and Road Initiative (BRI), the country has made continuous efforts to promote pragmatic cooperation with countries participating in the BRI in agriculture, a key sector of BRI cooperation, and realized mutual complementarily and common development in the sector with relevant countries.
So far, China has signed agreements on agricultural cooperation with 86 BRI countries and established stable working mechanisms with more than half of them. Over the past eight years, China has invested in more than 820 agricultural projects in BRI countries.
The country’s investment stock in BRI countries has exceeded $17 billion. Last year, its trade volume of agricultural products with countries participating in the BRI totaled $95.79 billion.
In 2012, China Shandong International Economic & Technical Cooperation Group Ltd. (CSI) and Shandong Lumian Group, both based in Jinan, capital of east China’s Shandong province, jointly registered a new company named New Epoch.
Agriculture Development Company in Sudan for the building of China-Sudan Agricultural Cooperation Development Zone.
The first phase of the project involves a total planned investment of $50 million, of which $46 million has been realized.
In 2017, the China-Sudan Agricultural Cooperation Development Zone was recognized as one of the first batches of 10 overseas agricultural cooperation demonstration zones by China’s Ministry of Agricultural and Rural Affairs.
Consisting of a central area in the Rahad irrigation area in El-Fau town, El-Gadarif State, Sudan, and multiple industrial parks, the China-Sudan Agricultural Cooperation Development Zone focuses on the development and building of free trade platforms for various links of the industrial chain from cultivation bases for superior varieties and breeds, planting and breeding bases to agricultural products processing, logistics services, and trading.
Through a development model featuring shared benefits and win-win results, the agricultural cooperation development zone has driven the agricultural development of the entire Rahad irrigation area that covers an area of 2.2 million mu (about 146,670 hectares).
The continuously deepened agricultural cooperation between China and Sudan has brought tangible benefits to local Sudanese people.
At present, the China-Sudan Agricultural Cooperation Development Zone is advancing the construction of its industrial parks with steady steps, according to Sun Lei, deputy general manager of new era agricultural development company, Ltd., adding that it is also conducting negotiations with relevant enterprises in the industrial chain on cooperation.
The construction of these industrial parks has to a large extent, helped solve the problem of employment for local people and increased their income, Sun disclosed.
With the construction of these industrial parks progressing steadily, great changes have taken place in El-Fau town in recent years, Sun said, explaining that the road condition in the town has got better, its markets have become busier, and many local people have replaced their bikes with motorcycles.
In September, 2016, Guangdong Guangken Rubber Group Co., Ltd., based in south China’s Guangdong province, took over Thai Hua Rubber Public Company Limited, which was the third-largest natural rubber producer in the world, becoming one of the largest natural rubber operators in the world that own a complete industrial chain.
The Chinese company has launched 42 natural rubber projects that are independently run, in countries such as Thailand, Malaysia, Indonesia, Cambodia, Laos, and Singapore, building a development framework that features a complete industrial chain including research and development, breeding of saplings, plantation management, deep processing, storage and logistics, and international trade. The company produces and sells more than 700,000 tons of dry rubber products from its overseas projects in a year.
In recent years, by carrying out mergers and acquisitions and building its factories, Guangdong Guangken Rubber Group Co., Ltd. has opened 26 natural rubber processing factories in Thailand, Malaysia, and Indonesia with a total production capacity of 1.3 million tons. The rubber factories invested by the Chinese company have boosted the benefits of planting rubber trees, created a large number of jobs for local people, and boosted tax revenues for the local governments. The Chinese company also opened schools for children of its local employees and built public facilities, improving the livelihood of the local communities.
In recent years, China’s Ministry of Agriculture and Rural Affairs and relevant authorities have jointly issued the Vision and Action on Jointly Promoting Agricultural Cooperation on the Belt and Road, and held the International Food Loss Reduction Conference and the International Forum on Black Soil Conservation and Utilization, sending a signal of strengthening agricultural cooperation and sharing the development outcomes of modern agricultural development to the world.

Several hit by gunshots at shopping mall in Copenhagen

Several hit by gunshots at shopping mall in Copenhagen

July 4, 2022
© All rights reserved by LeadPakistan