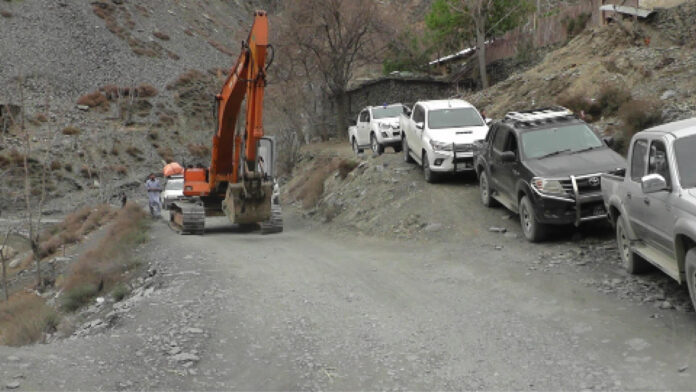 Gul Hamaad Farooqi.
CHITRAL
For the first time since the creation of Pakistan, work has started on the roads of Kailash Valleys having international importance. Domestic and foreign tourists will also have easy access after completion of these roads.. Deputy Commissioner Lower Chitral Anwarul Haq inaugurated the roads along with AC Saleem Thaqleen, AAC Hafizullah. Rafiq Alam, Project Director, National Highway Authority staff. PD Rafiq Alam briefed the local journalists about the ongoing project. He said that the length of this road would be 46 km while its width would be 11 meters. It also includes nine bridges, culverts, shoulder, a drainage system and blacktopping. He further said that NHA has sanctioned Rs 4.6 billion for this road while land compensation for the owners of land coming under this road would be paid by the provincial government.
The Deputy Commissioner said that this was a long-awaited demand of the people of the area and it would not only provide employment to 2,000 people but would also boost tourism as the people of Kailash are famous all over the world for their Unique and distinctive culture. Every year a large number of tourists visit here to see their various festivals.
The local people are also very happy on the construction of this road. A resident of Ayun says that when tourists come to see a festival of Kailash, they restrain for hours on this road which is only 22 kilometres long but due to the narrowness and dilapidated condition of the road it takes nine to ten hours which was a very painful process for tourists.
Thousands of people from Rambor, Bamburit , Ayun Valley and Barir Valleys were in dire straits due to poor condition of the road for which both Muslims and Kailash of these four valleys protested many times and now this road has been handed over to NHA. Practical work has also been started on its construction which will be completed in two years. The people of the area appreciated the initiative of the NHA high ups. The construction of the road will provide employment to thousands of people and on the other hand thousands of people living in these backward valleys will be connected to other parts of the country. This road will be a milestone in the construction and development of these backward valleys.