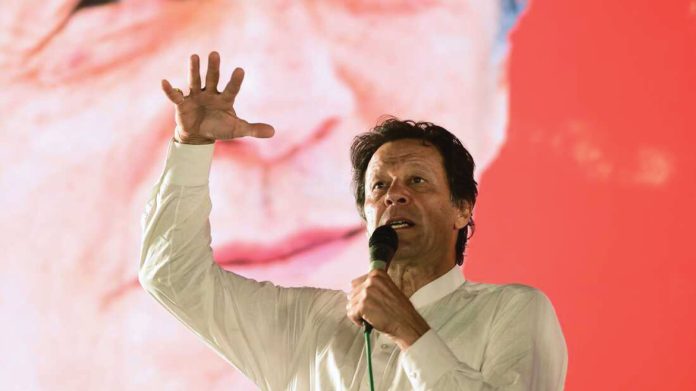 Says coalition allies ‘rushed’ ECP for foreign funding verdict
ISLAMABAD
Pakistan Tehreek-e-Insaf (PTI) supremo and former Prime Minister Imran Khan on Thursday said he was trying to introduce electronic voting machines (EVMs) in elections for more than two years, and the game of secret hands will end if EVM is introduced in the election. While addressing his party workers at the F9 Park via video link, Imran said Islamabad has been made a fortress as if someone is attacking from outside, the constitution allows us to protest peacefully but it seemed as if an enemy army had come, adding that  PTI always hold protest within the constitutional limits.
“The Punjab administration was getting secret help in the by-elections but they lost the elections despite the rigging when all these tactics failed, they finally used the Election Commission,” he said.
Regarding the recent ECP verdict, the former PM said that the ECP took decisions beyond its limits, adding that the rulers have made the Election Commission the way through which governments are controlled. “I have been pushing for electronic voting machines for two and a half years and if EVM is introduced the game of secret hands will end when the voting ends,” he added.
The former PM said that how can a political party run without money? If a political party wants to run, it needs money, adding that when he formed a political party, it was very difficult to collect money, overseas Pakistanis first gave me money and supported me, and half of Shaukat Khanum s money was overseas Pakistanis. “PTI is the only party which started political fund-raising, and political parties in the world do fund-raising. Fund raising details of PPP and PML-N should also be brought forward,” he demanded.
“The Election Commission has declared the money of overseas Pakistanis as foreign funding. If it is foreign funding, then what about the foreign remittances of $31bn which the overseas Pakistanis send? Does the Election Commission even know how fundraising is done? It is not foreign funding, when you raise money from a foreign country it is foreign funding, if you take money from a private company it is foreign funding,” Imran added.
There is a difference between an affidavit and a certificate. Shahbaz Sharif said in the court that Nawaz Sharif will return. It is called an affidavit. The meaning is completely different, Shaukat Khanum s annual budget is approximately 16 billion rupees, according to the Financial Times, crores of bribes were given to the Sharif brothers and they did not pay any attention,” the PTI chairman said.
PTI Cheif Imran Khan said that the PML-N and other unknown forces conspired with the ECP to get such an unlawful verdict against the PTI. PTI first rescued the country’s failing economy when it took charge in 2018, then it took the country out of a once-in-a-century pandemic. Just when the country was stabilizing, the opposition parties outsed our government, thinking it would bury our party, he added. He added that the by-election in Punjab proved that the people of Pakistan are with Pakistan Tehreek-e-Insaf (PTI). The PML-N lost the by-polls despite rigging, horse-trading and other manoeuvres, he added.
The PTI Cheif said that the PML-N delegation met with the ECP and ordered to announce the verdict of the PTI prohibited case. The ECP has exceeded its powers in the verdict, they are trying to suppress the people using the ECP, he added. Imran Khan said that he tried his best to implement electronic voting to curtail the rigging that takes place amid elections but the PML-N and PPP sabotaged the process. Using the EVM would have eliminated 130 out of 183 ways to rig elections, he quoted an NGO.
The former premier said that they de-seated their members who sold their votes in the senate elections. MPA and MNA are sold in every election but the ECP is unaffected, he added.
He said that it was the overseas Pakistanis who were the first to come forward and fund the PTI because they knew that they were fighting mafias. They demanded to investigate PML-N, PPP and PTI cases simultaneously but the ECP did not comply with the SC’s decision, he added.
He added that the ECP decision has said that getting funding from any foreign resident is illegal.
The PTI Cheif also showed video messages from overseas Pakistanis who were listed in the PTI prohibited funding case. He said that he participated in Arif Naqvi’s charity event in 2012 while he was charged with fraud in 2018, how could he have known that he would be charged for fraud?
He added that there is a difference between a certificate and an affidavit. An affidavit is given when you declare your own property, he added. He said that this whole drama is being staged to keep us in a slave mentality. This is the struggle for real independence, he added.
ECP allowed thieves and dacoits to participate in elections and rule our country which is shameful, he added.