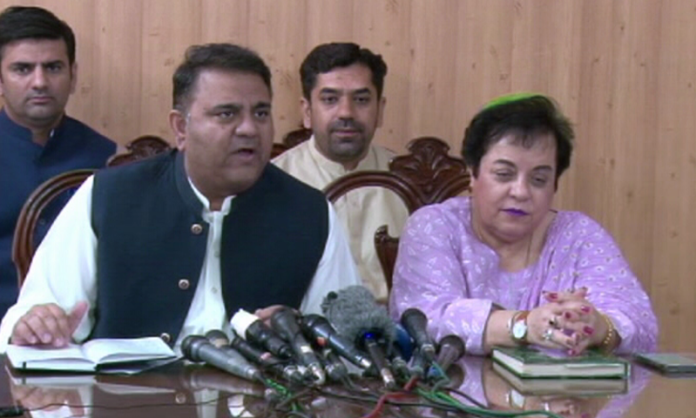 PTI Senior Vice President Fawad Chaudhry lashed out at Defence Minister Khawaja Asif on Monday for claiming the party had approached US official Donald Lu — whom ex-premier Imran Khan accuses of playing a part in his ouster — for forgiveness.

In an appearance on Geo News programme Naya Pakistan a day earlier, Asif claimed the government had obtained evidence that the PTI sought to apologise to Lu, who is the US assistant secretary of state for central and south Asia.

He doubled down on that claim in a tweet, saying that the former ruling party was imploring the US to “forgive and forget and let bygones be bygones”.

“If their pleas are accepted, then they will chant ‘long live the US’. If not then, they will go back to hurling abuses,” the defence minister said. “The formula for [dealing with] institutions inside and outside the country is the same,” he added.

Responding to Asif’s claim at a press conference in Islamabad, Chaudhry asked Asif whether he had gone deaf when Imran was giving his “policy statement in front of a gathering of tens of thousands of people”, referring to the PTI’s rally at Parade Ground on Saturday.

“Did you have cotton in your ears that you could not understand what Imran was saying?”

He said that the PTI wanted good relations with all countries but would not allow any country to decide “who would rule Pakistan”. “We cannot give this permission. We maintain relations on the basis of equality,” he said.

In March, the former premier, while he was still in office, had claimed that the opposition’s no-confidence motion against him was the result of a “foreign conspiracy” because of his external policy, and that funds were channeled from abroad to oust him.

Later, PTI leaders told journalists that they based their claim on a cable that former Pakistani ambassador in Washington sent to Islamabad on March 7, detailing the conspiracy. The cable included details of Ambassador Asad Majeed Khan’s meeting with Lu at the Pakistan Embassy.

Dawn learned from diplomatic sources that the conversation mentioned in the cable happened at a farewell lunch by the outgoing ambassador and that the cable did not say anything about a conspiracy. Lu, however, did convey the Biden administration’s ‘unhappiness’ over the former PM’s visit to Moscow on the day Russia invaded Ukraine.

Lu also said that this ‘unhappiness’ would continue as long as Imran was in power. During the long conversation, Lu also asked questions about the no-confidence movement against the PTI government as this was all over the media.