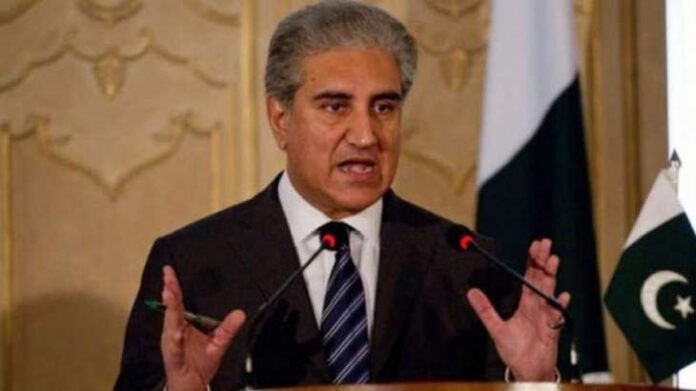 ISLAMABAD
Foreign Minister Shah Mahmood Qureshi has said that the present government has given a new direction to the country’s foreign policy from geo-politics to geo-economics for the welfare of people.
Speaking in the National Assembly on Friday, he said the country’s economy is now touching 5.37 percent growth rate regardless of the contraction caused by COVID-19 to the international economies.
He said according to a survey of World Bank, our agriculture sector is growing by 3.3 percent. He said our exports and remittances are reaching record levels besides the statistics show that per capita income is also increasing.
The Foreign Minister said regardless of gas shortage, the Urea production has witnessed an increase. He said we are providing urea to the farmers at much lower rates than the international market. He said action will be taken against those hoarding the commodity.
Shah Mahmood Qureshi admitted that inflation poseed a major challenge. He, however, said there are several international factors behind it including that of increase in the price of gas and petroleum products in global markets.
The Foreign Minister said we welcome the criticism of the opposition parties but they should not spread despondency amongst the people as it is not in the interest of the country. He said we took painful decisions to stabilize the economy.
Taking the floor, PML (N) leader Ahsan Iqbal criticized the government’s economic policies. Minister for Energy Hammad Azhar has categorically stated that gas theft will not be tolerated in any part of the country.
Responding to a calling attention notice in the National Assembly on Friday, he expressed satisfaction that Sui Northern Gas Pipelines Limited has significantly reduced its system losses from 12.5 percent to 8.5 percent over the last three years. He said there is a need to bring further improvement in Sui Southern Gas Company Limited. He pointed out that the country’s gas reserves are depleting at the rate of nine percent annually.
Minister for Energy Hammad Azhar introduced before the house the Private Power and Infrastructure Board Amendment Bill, 2022.
The house today passed two resolutions extending the Diplomatic and Consular Officers (Oath and Fees) Amendment Ordinance 2021 and National Rehmatul Lil Alameen Authority Ordinance, 2021 for a further period of one hundred and twenty days.
The Statement of Contingent Liabilities of the federal government for the current fiscal year was laid before the house. The annual reports of the Council of Islamic Ideology for the period from 2012-18 and the report on Islamic Law of Inheritance were also laid before the house.
The National Assembly adopted a motion allowing the use of its hall for the 48th session of the OIC Council of Foreign Ministers to be held in March. The motion was moved by Foreign Minister Shah Mahmood Qureshi. At the outset, the house offered fateha for those martyred in yesterday’s bomb blast in Lahore.
Responding to the points of PML (N) leader Ahsan Iqbal, Minister for Energy Hammad Azhar said that the PTI government has steered the country out of difficult economic situation. He said the previous government left behind a bankrupt economy.
He said our growth rate of about 5.4 percent is based on enhanced exports and revenue collection, increase in foreign exchange reserves and reduction in current account deficit. He said the world institutions are appreciating economic outlook of Pakistan. The house has now been prorogued.