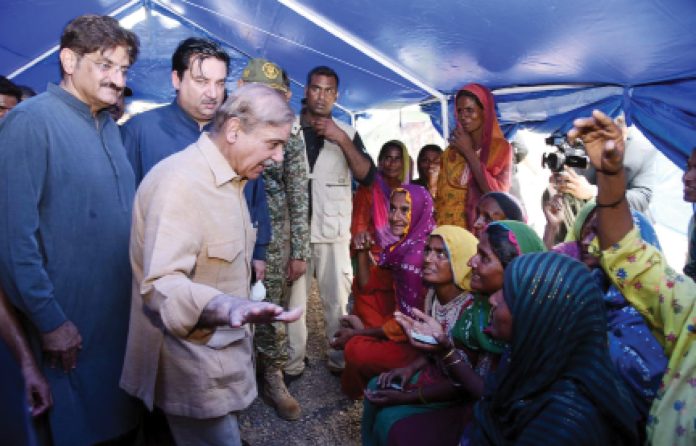 Rs38b
PM expresses resolve to fully support, assist flood-hit areas
SAJAWAL/ ISLAMABAD: rime Minister Muhammad Shehbaz Sharif on Saturday said that the federal government had allocated a grant of Rs38 billion to support each flood-affected family with a disbursement of Rs25,000. Speaking to the flood-affected people, the prime minister said he had already announced a grant of Rs15 billion to Sindh province while the distribution of flood relief amount among each family had commenced in Sindh province after Balochistan under Benazir Income Support Programme (BISP). BISP had the complete data, ensuring prompt and justified distribution among the deserving families, he added.
Assuring the provincial governments of the federal government’s support, the prime minister said others provinces would also be extended with such grants. The prime minister was accompanied by Chief Minister Sindh Syed Murad Ali Shah, federal ministers and other relevant authorities. He said with the support of the National Disaster Management Authority and other relevant departments, the federal government continued to support the provincial governments in the rescue, relief and rehabilitation efforts.
He said that a combined survey would be completed soon which would enable them to get an estimate of the damages and losses caused by floods across the country. The prime minister stressed that in this hour of trial, they had to work collectively, irrespective of doing politics. Without naming Pakistan Tehreek-e-Insaf, he said it was unfortunate that a political party was doing politics over the agreement with International Monetary Fund and such self-centered politics could cause irreparable damage to Pakistan as an IMF board was scheduled to hold a meeting.
Prime Minister Muhammad Shehbaz said that the entire country was badly affected with flash floods due to incessant monsoon rains, and resolved to overcome the issues with collective efforts.
The prime minister said that the heavy downpours in the season had caused human losses, damaged road and links infrastructure across Khyber Pakhtunkhwa, Punjab, Sindh and Balochistan. During a visit to review rescue and relief operations in flood-hit areas of Faqirani Jat, Oplano and others, the prime minister was given a detailed briefing over the situation and the relief efforts. Sindh Chief Minister Syed Murad Ali Shah and the federal ministers also accompanied the prime minister.
Prime Minister Muhammad Shehbaz Sharif said that the situation after recent floods demanded that they should support the calamity hit people with joint efforts as a nation. On his Twitter handle, the prime minister said that he had been visiting the flood-hit areas. The magnitude of the calamity was bigger than estimated. “Let us rise above our differences & stand by our people who need us today,” he posted. The prime minister had been taking extensive visits to different flood-affected areas of the country to review the rescue, relief and rehabilitation efforts. On Saturday, the prime minister visited Sajawal district of Sindh.,