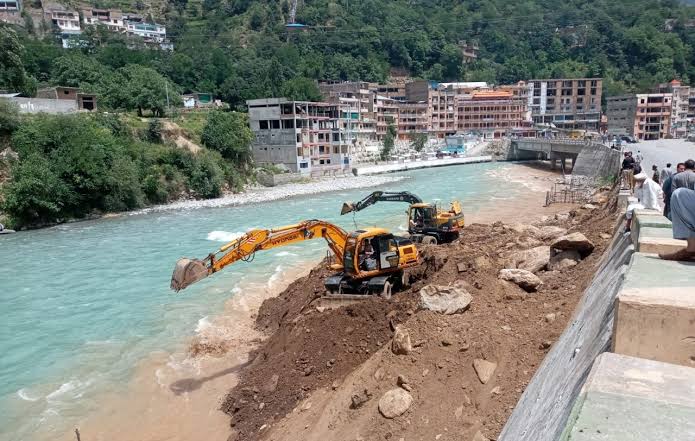 SWAT: The district administration on Thursday launched an operation against illegal constructions, encroachments, and accumulation of debris along with River Swat here.

The decision to launch the anti-encroachment operation was taken at a high-level meeting chaired by Commissioner Malakand Division Shaukat Ali Yousafzai at Commissioner’s office Saidu Sharif.

The meeting also approved the formation of a committee to work out a strategy for identifying encroachments and other illegal activities along River Swat.

During the meeting, Commissioner Shaukat Ali Yousafzai expressed outrage over illegal constructions and debris being dumped around Swat River. He said that such behavior toward the natural environment, especially with Swat River is intolerable. Strict action should be taken against encroachers, said the commissioner. The commissioner said that a committee is being formed to move forward under a comprehensive plan.

On the other hand, the committee has started its work and on the recommendations of the committee, the Swat district administration has sent 21 people to jail under section 3 of Maintenance of Public Order Ordinance.

On the other hand, residents of Kalam staged a sit-in against the arrests during the anti-encroachment operation in Kalam valley last night.

The speakers claimed that citizens of Kalam were arrested in a raid on their houses last night, which is against local traditions and tantamount to victimization.

They announced that their protest would continue until the arrested persons are released.

Meanwhile, Malik Pattan Khan, who led a protest against the administration in Kalam Valley, died of a cardiac arrest.

He was on the way home after the protest ended when he suffered a heart attack which proved fatal. He was a senior member of Jamaat-e-Islami.