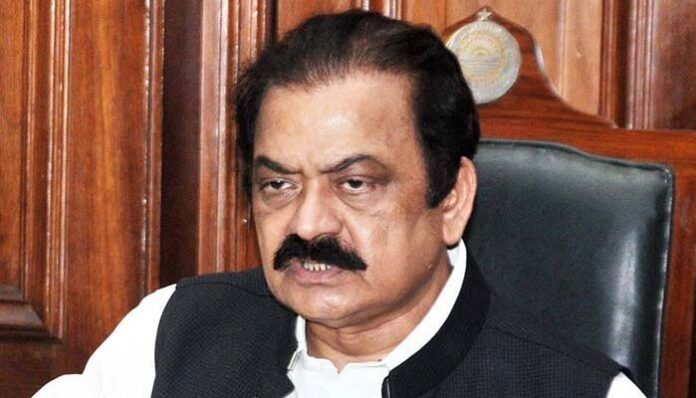 PML-N Punjab president Rana Sana Ullah Khan has said 1973 constitution is consensus constitution and if we go beyond the constitution then the country will drift into some other crisis like situation.

“Here presidential system remained in place for 35 years and all the powers were concentrated in the hands of one man. There was no parliament. No one had any worth, he said this while talking to media men here Saturday on the occasion of his appearance in the court.

“When explosion took place PM at that time was sitting in PM House along with his “Gallam Galoch” brigade. No meeting is held so much regularly like galam goloch brigade meeting is held, he remarked. PM himself directs how the abuses have to be hurled. How the matter has to be scandalized. They are trained.

Money is distributed out of aid received from foreign countries in connection with corona epidemic among those spokespersons who are deployed on hurling abuses on political rivals through social media and fulfill their political agenda.

He claimed that Rs one billion out of foreign assistance was distributed among “Gali Galoch” ( abusers ) brigade. We are taking up this matter in parliament.
Responding to a question about offer made by Sheikh Rashid about return ticket to Nawaz Sharif he said what is Sheikh Rashid position. Every one in Rawalpindi knows about him. Every one knows he is from how much leading family. He reached this level through flattery.

He remarked Pakistan is country of Nawaz Sharif. People of Pakistan has elected them as Prime Minister (PM) thrice. They have given him much love and honor. He too loves Pakistan and Pakistani nation. He will do come to Pakistan. When he comes he will announce about it on his own. I and no one else will be required to make announcement in this regard. Sheeda Talli should not be worried about it.

He questioned why the entire nation is crisis like situation every time. The main reason is this that there is no government in place in this country.

He went on to say PM is only doing one job. He has annihilated the country. He has looted the country through corruption. He will soon be held accountable.
To a question about presidential system he said not only PML-N but other opposition parties are too very clear on it that 1973 constitution is consensus constitution. All the four federating units are agreed on it.

He alleged government is only focusing on political victimization. Shahzad Akbar and others hold press conference daily to pressurize judges.

He underlined they are bringing amendment in the laws. They are introducing an amendment that if a judge does not decide a case within 9 months then the respective judge will be asked why has not decided the case. Farogh Nasim who is agent of imperialistic forces spent his whole life in such things.