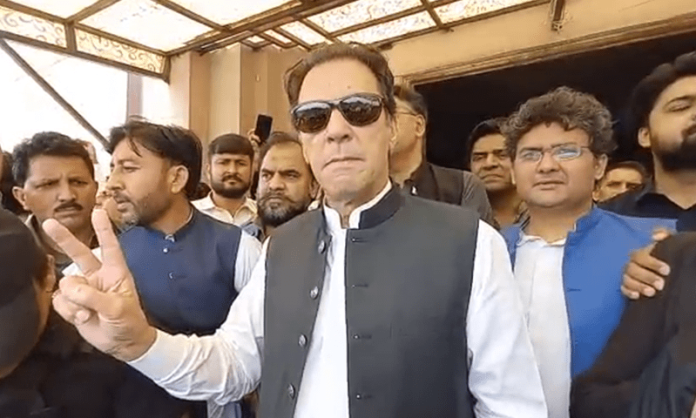 ISLAMABAD
The Islamabad High Court (IHC) on Sunday approved the pre-arrest bail of PTI chief Imran Khan, a day after an arrest warrant was issued for the former premier in connection with his controversial remarks against Additional District and Sessions Judge (ADSJ) Zeba Chaudhry and other officials at an August 20 public rally.
Imran’s arrest warrant, dated September 30, was issued by Senior Civil Judge Rana Mujahid Rahim. As details of the warrant emerged, PTI workers and leaders converged on Banigala to scuttle any attempts at his arrest, warning once again that he is a “red line”.
According to Islamabad police, after the Islamabad High Court struck down terror charges from the case registered against Imran, the case was transferred to a sessions court and the PTI chief had not obtained his bail from there.
The police also said he had also not attended the last court hearing on the matter and the warrant was issued to ensure his presence.
Subsequently, Imran filed a petition with the IHC on Sunday through his counsel Babar Awan.
In the plea, Imran said that a terrorism case was initially filed against him, however, the charges were later struck down by the high court and the case was transferred.
He alleged that the coalition government had filed a false case against him, the purpose of which was to quash the peaceful movement against the “corruption mafia”.
According to the plea, the purpose of the case was to arrest Imran in order to put an end to a “peaceful political movement.
Justice Mohsin Akhtar Kayani took up the PTI leader’s petition and barred Islamabad police from arresting Imran. The court approved Imran’s bail against the submission of surety bonds worth Rs10,000.
The IHC also directed Imran to appear before the court concerned before Friday.
Speaking to the media outside the court, Awan said the IHC had granted the PTI chief “pre-arrest transitory protective bail”, adding “we will turn up at the lower court before Oct 7.”
Awan said he appeared before Justice Kayani and raised a few “factual points” pertaining to the case.
“I told him that we had already obtained bail in this case as well as the fact these charges can’t be imposed because they are non-cognisable offences,” he said.
The PTI chief’s counsel said whatever happened yesterday evening was “very dangerous” as the whole country stood up without any call. “This imported government must see Imran’s power.”
He was of the view that lawyers, peasants, labourers, students, youth as well as the whole of Pakistan would take to the streets once the party leader gave the date for his long march.
He said it would now be the PTI’s turn to file cases based on “truth and facts”, adding the government won’t be able to lodge cases anymore.
The decision to initiate contempt proceedings against Imran was taken by the IHC’s Justice Aamer Farooq on August 22 while hearing a petition challenging Gill’s police remand. The court hadsummoned Imran on August 31 and subsequently issued him a show-cause notice.
A day before the hearing, the former prime minister had submitted a reply before the IHC wherein he had expressed his willingness to “take back” his words about Judge Chaudhry if they were “regarded as inappropriate”. He had pleaded before the IHC that the judges who had agreed to initiate the case against him should consider withdrawing themselves from the bench as, according to him, they had pre-judged the matter.
However, the IHC had deemed the response to be “unsatisfactory” and asked the PTI chief to submit a “well-considered” response.
Following this, Imran had submitted another reply to the court. In the revised response, Imran had stopped short of rendering an unconditional apology.
On September 8, the IHC had decided to indict Imran, once again calling his response “unsatisfactory”.
However, at the next hearing on September 22, when it was expected that charges would be framed against the PTI chief, Imran had offered to tender an apology to Judge Chaudhry and escaped the indictment.
Following his statement in the court, the larger bench hearing the case had said that it was “satisfied” with the apology and asked the PTI chief to submit an affidavit.
Prior to submitting the affidavit, Imran on Friday appeared before an Islamabad sessions court to personally apologise to Judge Chaudhry, but his apology was left hanging as the judge was on leave.
Meanwhile, in his affidavit, Imran said he had “realised during these (contempt) proceedings before the honourable court that he might have crossed a red line”. However, he added, he never intended to threaten Judge Chaudhry and “there was no intention behind the statement to take any action other than legal action”.
He said he wanted to assure the IHC that he was willing to explain and clarify before Judge Chaudhry that“ neither he nor his party seeks/sought any action“ against her and he was willing to apologise to her “if she got an impression that the deponent (Imran) had crossed a line”.
He also expressed his willingness to take any further steps that the IHC “deems necessary and appropriate for the satisfaction of the honourable court that he never intended to interfere in the process of the court or impugn the dignity or independence of the judiciary”.