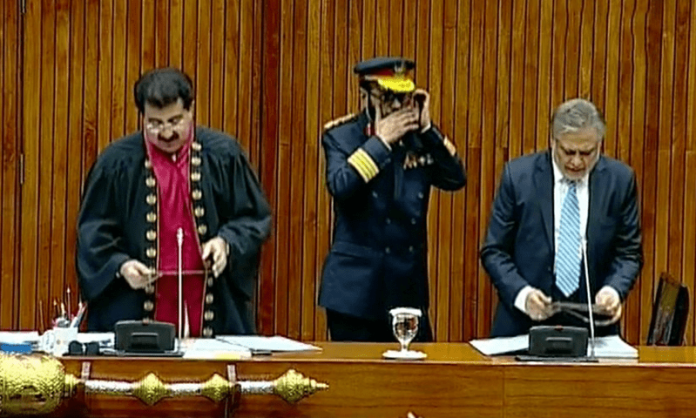 Senate Chairman Sadiq Sanjarani on Tuesday administered oath to senior PML-N leader Ishaq Dar as a senator amid protest by opposition lawmakers led by the PTI.

The session began with the recitation of the Holy Quran after which Dar was sworn in.

During the ceremony, PTI senators gathered near the rostrum and chanted slogans such as “bhagora (absconder)”. Some of the opposition senators were also carrying placards and posters. A flustered Sanjrani repeatedly exhorted the rowdy senators to return to their seats but they refused to do so after which the security personnel was called in.

Soon after the oath, the chairman opened the floor for discussions. Subsequently, Leader of the House Azam Nazir Tarar welcomed Dar and hoped that he would serve the country, as he had done in the past.

PML-N leader Ishaq Dar is sworn in as opposition senators protest on Tuesday. — @pmln_org
Addressing the opposition, Tarar said: “We have always taken care of the sanctity of this house and we have always shown respect”.

“The laws and Constitution are applicable to everyone […] your reservations are your personal ones,” he added.

However, Leader of the Opposition Dr Shahzad Waseem said that the tradition of the house had never been that a “man absconds and comes back”. “His seat is empty for four years. An ordinance is introduced only to protect him.”

The PTI senator went on to allege that the prime minister helped Dar escape. “According to my information, he (Dar) has not surrendered before the court; he has come straight to the Senate. Does the Senate not have any respect? Absconders come and go […]”

They, Shahzad contended, came in an aeroplane that was paid for by taxpayers, adding that the person accused of “ruining the economy” was being brought in again.

Countering the opposition’s remarks, Tarar said that in Dar’s case, a petition was filed, which was adjourned till October 7. “You have the right to criticise but don’t warp fact,” he concluded.

Before the oath, Dar met Sanjrani in the chairman’s chamber as the leaders discussed political matters. He was accompanied by Law Minister Azam Nazeer Tarar and Interior Minister Rana Sanaullah.