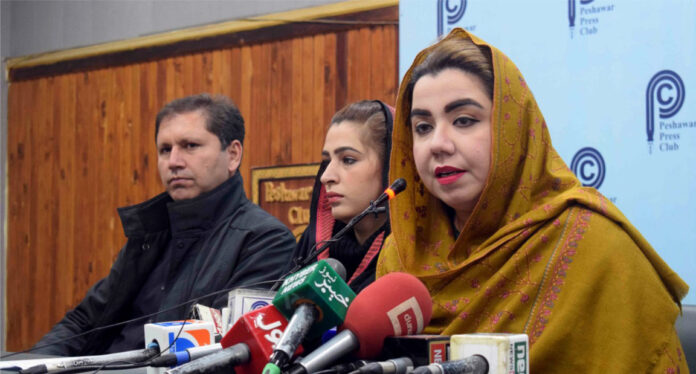 Peshawar
The Awami National Party (ANP) on Thursday asked the Pakistan Tehreek-e-Insaf (PTI) government to desist from utilizing government machinery and officials to manipulate the second round of local government elections in Khyber Pakhtunkhwa (KP) slated for March this year.
Speaking at a press conference, ANP provincial spokesperson Samar Haroon Bilour and information committee members said the government would be responsible for the consequences if the government tried to rig the upcoming local government election in remaining districts.
The ANP said the government has established Zakat committees in district Dir, Malakand and other northern areas unlawfully to influence voters through distribution of Zakat funds.
ANP provincial spokesperson Samar Haroon Bilour also criticized the provincial government over its recent posting and transfer order of 16 deputy commissioners and termed the move as election stunt to manipulate elections, adding that provincial government allegedly planning to rig the local body polls.
Samar Haroon said that the people of the newly merged districts were being treated like stepmothers as thousands families were longing for medicines and necessities of life.
The ANP demanded that the DC office be shifted to Khyber immediately and immediate steps be taken to address the plight of the people. Regarding the arrival of PPP delegation at Bacha Khan Markaz Peshawar, she said that PPP has invited ANP to participate in the long march.
ANP will inform PPP about its decision after consultation she added.