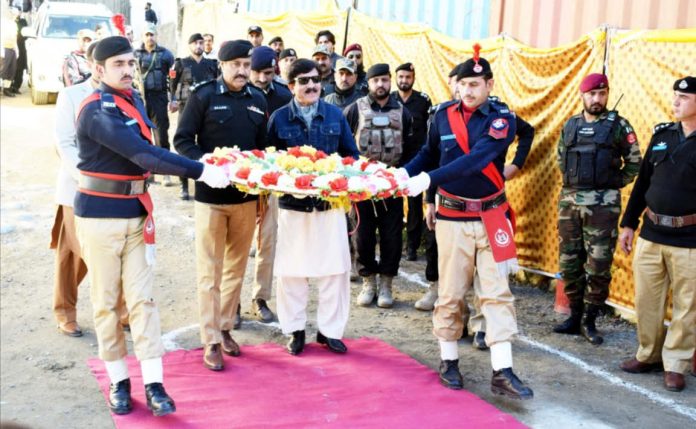 Haqnawaz Shinwari
PESHAWAR
Regional Police Officer Malakand Sajjad Khan on Thursday said that whole Malakand Division was in peaceful environment and the tourists can come here with full trust and confidence in terms of law and order context.
Consecutive police search and strike operations were made in Malakand Division and the whole region was safe and clear, the RPO Sajjad added during his visit to newly constructed offices and a mosque in district police office at Alpori, District Shangla.
He further said that due to huge sacrifices of police force, now the entire province was in peaceful environment and the same force will make his continue efforts and duties to sustain this peace in Future as well.
Meanwhile, presiding over a meeting of the local public notables at DPO office he said that there is best coordination among public and police in Shangla which shows fully confidence of masses on district police performance.
He added that Jirga was an unavoidable element of Pashtoon culture and keeping the importance of this public spare system, the forum of Dispute Resolution Councils DRCs would be make more strengthen to solve the basic minor disputes of public outside the court on mutual understanding with justice.
He shed light on control of narcotics and said that unfortunately today the drug addiction was flourishing among youth wherein Ice drug addiction was on top of all other narcotics.
He asked the notables to cooperate with police to make the society free from drugs to secure the future of young generation.
Earlier, he along with Commissioner Malakand Division Shaukat Ali Yousafzai inaugurated the newly constructed offices and a mosque in district police office at Alpori.
Commissioner and RPO Malakand during their visit, reviewed the ongoing new construction work of police infrastructure at district headquarter, while they were briefed by District Police Officer (DPO) Muhammad Imran, regarding prevailing law and order situation in the entire district.
Upon their arrival at police line, a smart contingent of police presented them guard of honor and they placed floral wreath on Yadgar-I- Shohada.