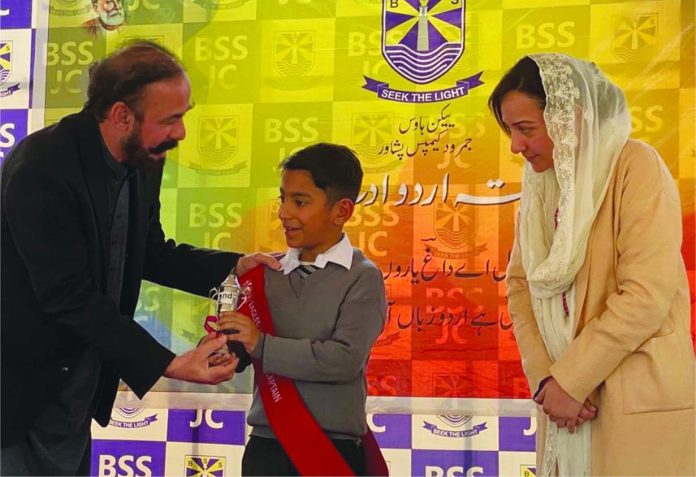 Co-Curricular activity help to improve students mental health: Zafar Ali
PESHAWAR
Beacon House School, Jamrud Campus Peshawar organized a declamation competition under its Urdu Literature Week concluded here the other day, said a press release issued here on Thursday.
Syed Zafar Ali Shah, Project Director, KP Local Government Department attended the ceremony as chief guest.
In connection with the competition, a purposeful elocution competition was held among the students of Grade One and Two on the topics of “Learn to make a row from ants” and “My father is not less than my mother”. Students took part in the competition with great enthusiasm.
Syed Zafar Ali Shah while addressing the parents and students on this occasion urged them to pay equal attention to curricular and co-curricular activities of the school children while the parents should also fully guide and encourage them in this regard. He said that the positive impacts of such events help in improving the mental and creative abilities of children.
Zafar Ali Shah while appreciating the role of Beacon House School System in improving the quality of education said that organizing such creative activities is proof of the institution’s great sense of responsibility.
He said that the provincial government has established an atmosphere of competition in private and public educational institutions and these are the very learning centers where the students are equipped with knowledge and their character building is also ensured whereas going forward they become the best doctors, engineers, politicians, traders, army officers, doctors, scientists and teachers, he added.
Syed Zafar Ali Shah called upon all educational institutions to teach the students practically along with academic theories. He said that ants walking in rows give us a clear lesson of discipline and order in life from nature’s side.
He said that in order to make the Peshawar BRT project successful, an awareness campaign was conducted first so that Peshawarites could avail full advantage of this modern facility and this project became a success story.
Later, the chief guest distributed trophies, shields and awarded certificates among the students who won the speech competition. He also gave away appreciation certificates to the teaching and administrative staff of the school.
On this occasion, the school children also presented a tableau on a poem of Allama Iqbal that was highly appreciated by the chief guest and parents.