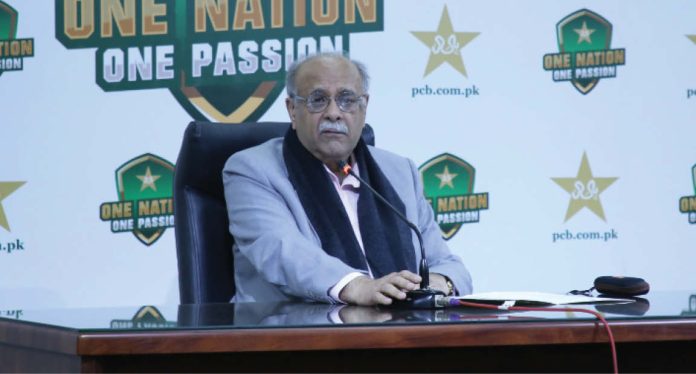 I am personally in negotiations with Mickey and we have resolved 90% of issues, says Najam Sethi
LAHORE
Mickey Arthur is set to return as Pakistan’s head coach, Chairman of Pakistan Cricket Board (PCB) Management Committee Najam Sethi said on Monday.
Former spinner Saqlain Mushtaq has decided against extending his coaching contracts with the cricket board, according to media reports, and Sethi is keen to bring back Arthur.
“I am personally in negotiations with Mickey and we have resolved 90% of issues,” Sethi told a news conference, where he also revealed that he has appointed former Test cricketer Haroon Rasheed as the new chief selector, replacing former all-rounder Shahid Afridi who held the post on an interim basis
“Hopefully, we will very soon share the news that Mickey will be joining us and I’d like him to build his own team of coaches once he is here.”
Former South Africa, Australia and Sri Lanka coach Arthur was in charge of the Pakistan team between 2016 and 2019 when they won the 2017 Champions Trophy and became the top-ranked T20 team in the world.
The Johannesburg-born 54-year-old currently has a long-term contract with Derbyshire.
ACC meeting
During the presser, he further told the media that he will attend Asian Cricket Council (ACC)’s next meeting in Bahrain and will put forward Pakistan’s stance related to hosting Asia Cup later this year.
“Finally, we have a date now to meet ACC officials. I will attend ACC’s meeting on February 4 in Bahrain. I am not sure about our stance for now, I will decide it in the meeting keeping an eye on the situation,” he said.
Sethi was expected to meet ACC officials on his recent visit to Dubai for attending India-backed International League T20 (ILT20)’s opening ceremony that took place on January 13. Reportedly, Sethi didn’t get a chance to meet ACC officials on the sidelines.
Former PCB chairman Ramiz Raja had stated that Pakistan won’t go to India if they pull out from Asia Cup in Pakistan. The statement came after ACC president and BCCI’s Secretary General Jay Shah claimed last year that India has already decided to not participate in the Asian event in Pakistan. Shah’s statement wasn’t confirmed by BCCI or ACC officially.
Pakistan are scheduled to host Asia Cup for the first time after almost 14 years. The event will be based on 50-overs format keeping in mind ICC World Cup 2023 which is scheduled in India later this year.
‘Cases’ on hold
Sethi remarked that the cases of two to three cricketers, including Sarfaraz Ahmed and Mohammad Nawaz, are on hold and they all know why their cases are on hold.
“First, they need to resolve all their outstanding issues. If they could not apologise for the cases and persist on being benched, then that’s fine,” he said.
Sethi further said that the rehabilitation project has ceased because the team does not need it. “We do not need to pour extra millions of rupees into the facilities which are already available,” he added.
Three members team has also been set up regarding the pitches. There would be a need for consultations regarding the separate teams, PCB’s top official said noted.