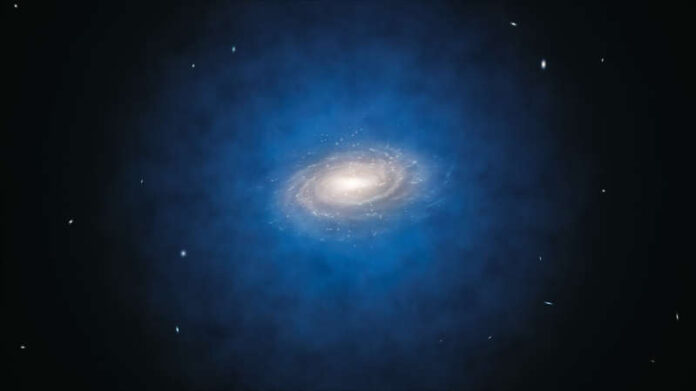 A new model of the Universe suggests that modifying Newton’s theory of gravity could do away with the need for dark matter. The model instead relies on an as-of-yet undiscovered form of gravity to explain some of the observations attributed to this mysterious substance.

The findings could explain the characteristics displayed by a form of radiation called the Cosmic Microwave Background (CMB) that permeates the entire Universe and is a leftover from its earliest moments, without the need for dark matter to exist.

A paper detailing the research authored by Czech Academy of Sciences researchers Constantinos Skordis and Tom Zlosnik is published in the journal Physical Review Letters.

“The advantage of the new model is it is able to fit the large-scale cosmological data, like the cosmic microwave background, which other modified gravity models before it, were not able to do,” Skordis told Newsweek.

Currently, astronomers use dark matter to explain phenomena observed in space that cannot be explained by the measured quantities of “normal” everyday matter that exists in galaxies.

Because we can’t see this matter, that leads to the conclusion that it doesn’t react with light like the matter that comprises stars, cosmic gas and dust, planets, and us. Hence the name dark matter.

As we haven’t yet directly detected dark matter, and have only measured its influence, some researchers speculate it may not exist at all and instead, suggest that our ideas of gravity could be incorrect.

This leads to the creation of MOdified theories of Newtonian Dynamics, or MOND, theories that revise our concept of gravity to explain the observed effects of dark matter without the need for this mysterious substance.

The problem is that while MOND models in the past have had some success explaining how galaxies hold together and other characteristics of the Universe attributed to dark matter, they have struggled to explain features seen in radiation left over from the earliest moments in the Universe’s history.

The CMB was created as the infant Universe expanded and cooled to the point that light was allowed to freely travel through it.

This is known as “the last scattering” and is defined as the moment the Universe went from opaque to transparent. It marks the last moment at which photons, the fundamental particles of light, and other particles, were at the same temperature.

As it is found almost evenly throughout the Universe, the CMB is part of the large-scale structure that other MOND models have failed to explain.

The theory suggested by Skordis and Zlosnik takes an idea common to many MOND models, the idea that gravity is actually created by two fields rather than one.

One of these fields, the authors suggest, has one value at every point, like temperature does. The other takes two values at every point, much like a traveling car has velocity and direction.

They then added parameters to this two-field gravity model that suggest gravity fields in the early universe that mimic the characteristics attributed to dark matter. The duo then watched their model evolve over time seeing gravity change into a force that is similar to that described in other MOND models. A force that can explain the distribution of the CMB.

The next step in the testing of the model could be pitting it against phenomena that exist in the Universe that dark matter models have struggled to explain.

The team may have a long way to go before their MOND model convinces researchers to abandon dark matter altogether. Skordis himself points out he won’t be stopping work on dark matter theories in favor of MONDs just yet.

“I work with MONDs and dark matter models, so I’m not taking sides,” he concluded. “Anything that can advance our understanding of the Universe is interesting.”