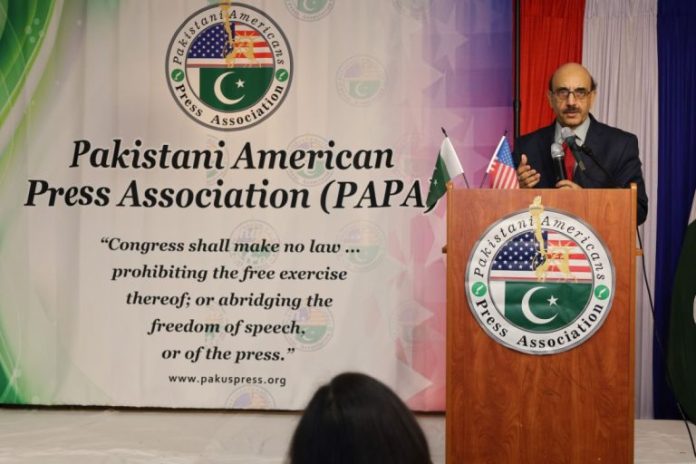 Pakistan’s Ambassador to the United States, Masood Khan, has called for a long-term US commitment to enable developing countries, like Pakistan, cope with the impacts of climate change that are disrupting the natural, economic and social systems.

“Recent devastation caused by unprecedented floods in Pakistan and Hurricane IAN in Florida and adjacent US states has clearly demonstrated that no country was immune to the phenomenon of climate change,” he told a well-attended congregation of Pakistani-American Press Association, held to celebrate 75th anniversary of establishment of Pak-US diplomatic relations, according to a Pakistani embassy press release.

“We need to come together and act fast before it is too late,” the Pakistani envoy added.

The event was attended by Pak-American journalists, officials from the US State Department and prominent members of Pakistan diaspora, hailing from various parts of the United States.

Ambassador Khan highlighted the devastation wreaked by the recent floods in Pakistan that has displaced 33 million people, including 16 million children, and inundated one-third of the country’s landmass.

“It is a disaster within a disaster”, he said, referring to the waterborne diseases that were fast spreading in areas covered under water.

The Ambassador thanked the US government, Congress, Senate, private sector, philanthropists and many others who contributed in their individual capacity to express their solidarity with their Pakistani friends.

He also lauded Pakistani-American community for their generous support for the relief and rescue of the affected populace.

Sensitizing the audience about the huge challenge of reconstruction and rehabilitation, Masood Khan called for a long-term commitment of the United States with Pakistan to enable the country cope with the challenge.

“We have been partner in peace. We have fought wars together. Now we need to confront this challenge together and transform crisis into an opportunity by building back better and greener,” the Pakistani envoy said.

Ambassador Akbar Ahmed, a former Pakistani diplomat and scholar, who hold the Ibn Khaldun Chair of Islamic Studies at American University and a Global Fellow of the Wilson Center, stressed the need for the two communities to develop a better understanding of each other.

Alison Lapp, Disaster Operations Specialist at USAID’s Office of US Foreign Disaster Assistance, reiterated that United States was committed to stand besides Pakistan at this difficult hour. About the US assistance provided so far, she underlined areas including agriculture, increasing crop productivity and building climate resilient infrastructure that could withstand any such a calamity in future.

Khizr Khan, a prominent Pakistani who received the Presidential Medal of Freedom – the highest US civil award — spoke about the common foundational values that bind Pakistan and the United States together.

Molly Stephenson, Director South and Central Asia Press and Public Diplomacy of the US State Department, referred to various areas of cooperation between Pakistan and the United States, including the contribution made by the United States in relief and rescue activities for the flood affectees, the cooperation in education sector, women empowerment and meeting the challenge of COVID pandemic. “Continuing our dialogue in various fields, we would deepen Pak-US relationship”, Ms. Stephenson said.

Ambassador Masood Khan also distributed various awards to prominent Pakistani-Americans including Khizr Khan, famed star Reema Khan and others for their achievements in their respective fields.

The Ambassador also felicitated the office-bearers and members of Pakistani-American Press Association for organizing the event and highlighting the strengths of decades long Pak-US friendship. The Pak media in the United States, he said, was playing a critical role in bringing the two countries together and creating better understanding of each other’s perspective.