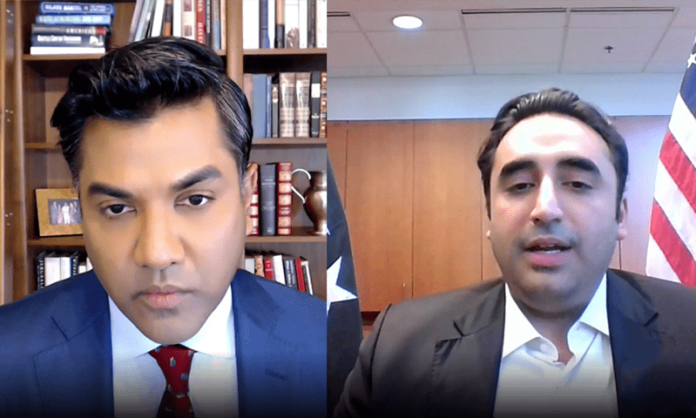 Foreign Minister Bilawal Bhutto-Zardari has said he would like Pakistan to play the role of a bridge between China and the United States, rather than play a part in exacerbating tensions or “being a geopolitical football”.

The foreign minister made these remarks while answering a series of questions during an interview with Foreign Policy on Islamabad’s ties with Washington and Beijing, particularly in the context of assistance pledged and provided by the two in the wake of calamitous floods.

“What China does — whether it’s with Sri Lanka or Pakistan — that’s totally China’s decision. Just like it’s 100 per cent America’s decision in either of these circumstances,” he said after Foreign Policy’s Ravi Agarwal pointed out that Beijing “hasn’t quite come to Pakistan’s aid in a big way” after this year’s catastrophic floods and that even Sri Lanka wasn’t able to get much help from China in the wake of an economic crisis.

Bilawal went on to say: “Rather than being a point of competition or a venue for these divisions (between China and the US) to be exacerbated, I would like Pakistan to continue to play a role that we have in the past. Pakistan originally played a bridge between China and the US, resulting in diplomatic relations between the two countries.

“And right now, particularly when we’re drowning in floods, I don’t want to play any part in exacerbating any tensions or being a geopolitical football.

“In this time of great geopolitical division, I would much rather play the role of a bridge by uniting these two great powers around working together for climate change.”

The foreign minister hoped that “perhaps, Pakistan’s unique position as a friend of both the US and China could encourage cooperation on this front”.

Bilawal’s remarks come against the backdrop of China and the US engaging in a war of words over assistance for debt and flood relief to Pakistan to help it cope with the consequences of this year’s deluges.

On Monday, US State Secretary Antony Blinken had called on Pakistan to seek debt relief from China while reiterating Washington’s support to Islamabad in these challenging times.

The remarks had drawn a censorious response from China, whose foreign ministry spokesperson Wang Wenbin had called out the US for “passing unwarranted criticism against Pakistan-China cooperation” and urged it to do something “real and beneficial” for the people of Pakistan.

For his part, Bilawal has called on both the world powers to set aside their differences and work together to deal with the challenge of climate change.

Speaking to Foreign Policy, Bilawal asserted that “not everything is about the geopolitical conflict of the US and China.

“And I think it’s preposterous that we’re even having that conversation while talking about my country’s survival and our ability to deal with cataclysmic flooding—it’s absolutely ridiculous. We won’t be able to confront climate change if the United States and China don’t work together”.

In this connection, the foreign minister also explained that the relationship between China and Pakistan had “long, bipartisan roots”.